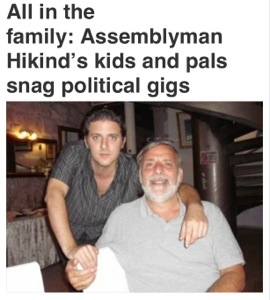 Sometimes it pays to be a family member or a relative of an elected official. In this case, it really pays, well the taxpayers money does, to be theson or a friend of Dov Hikind.

Assemblyman Dov Hikind’s two sons are quietly working part time gigs for two other Assembly members, and at the same time getting the help of their dad to land job opportunities for their colleagues in non for profits, the NY Daily News reports.

Since September 2011, Yoni Hikind has earned $12,964 as a legislative aide to Assemblyman Peter Abbate Jr. and Shmuel Hikind pocketed $10,470 as a community liaison for Assemblywoman Rhoda Jacobs , just enough to entitle them with taxpayer-funded healthcare.

Speaking to Reuvan Blau and Glenn Blain, Mr. Hikind bluntly admitted that the state payroll of his colleagues in Albany is partially served to benefit his kids maintain their status as part of his royalty. “I help strangers and certainly don’t discriminate against members of my own family,” said Mr. Hikind, a public servant, representing Borough Park, for the last 32 years.

According to the State’s Legistlative Ethics Commission, “no member of the legislature may participate in any decision to hire, promote, discipline or discharge a relative for any compensated position at, for or within any state agency, public authority or the legislature.” That doesn’t prevent, however, lawmakers to recommend a colleague to hire their kids for some pocket money.

But Mr. Hikind’s aide to his children doesn’t stop there, according to the investigative report.

Rabbi Elchonon Schwartz, who was appointed as head of the Yeshiva, hauled in $42,284.08 by Mr. Hikind from March 2011 to September 2012, as a special project coordinator.

“People are always looking for additional work to supplement their jobs,” was Mr. Hikind’s awkward response, noting that Mr. Schwartz simply declined to join his staff again for the summer. In Mr. Hikind’s world, the month of March is the presumed start of the summer.

Reviewing Mr. Hikind’s past, it seems that taxpayers funds were always part of forming his long career. In August of 1997, State Assemblyman Dov Hikind was indicted on charges of stealing Government funds, conspiracy, fraud and embezzlement. The prosecutors claimed that the Assemblyman used government funds from Brooklyn’s largest Jewish community council, COJO, as a kind of private cash reserve for political and personal needs.

According to the NY times, Mr. Hikind was accused in the Federal indictment of receiving at least $40,000 in payoffs from officials at the Council of Jewish Organizations of Boro Park in return for obtaining hundreds of thousands of dollars in state funds for the group and its affiliates. The prosecution charged that officials at the social service group had diverted up to $15,000 of the organization’s funds to pay such expenses as school tuition for Mr. Hikind’s daughter and niece, a trip the Assemblyman and his family took to Israel, a car rental for him and a computer for his office.

Jeff Reznik, Hikind’s chief of staff between 1993 and 1995, testified that Hikind helped him get a job with an affiliate of the Council of Jewish Organizations of Boro Park after he told Hikind his staff salary of about $30,000 per year was insufficient.

In July of 1998 Mr. Hikind was eventually acquitted by the jury, since there was no concrete evidence that Mr. Hikind received the payments with corrupt intent.

12 year later in spring of 2010, Assemblyman Dov Hikind directed up to $30,000 from his campaign account towards his favored City Council candidate Joe Lazar, who ran to replace Simcha Felder’s vacated seat in a special election, in what appears to be coordinated expenditures on Lazar’s behalf to skirt the city’s campaign finance law, according to interviews and campaign finance records, City and State NY reported.

Three years later, Joe Lazar, who lost to David Greenfield, was fined a grand total of $236,774 and forced to repay all of the public funds it received. Mr. Lazar was fined $123,874 for vastly exceeding the CFB’s strict spending limit. The limit for the 2010 special election was $168,000 and Mr. Lazar surpassed that by $41,291.33. More notably, Ross Brakan reported, Mr. Lazar was also fined an additional $20,000 for failing to report expenditures Assemblyman Dov Hikind made through his own campaign committee and his political club, the United New York Democratic Club, on Mr. Lazar’s behalf.

This all leads to the conclusion that Mr. Hikind’s ritual of picking and choosing, granting dividend to his loyalists, with taxpayers-funds, are part of him establishing himself as the Jewish political power-broker, a status recently ruined by the blackface controversy last Purim.