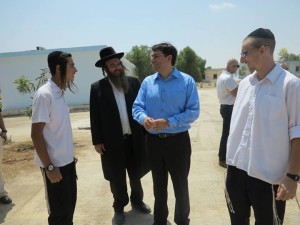 Yeshivas Hararei Tzion, the first chareidi Mechina located in Camp Gadi in the Jordan Valley, is up and running. The school will open to talmidim on August 7, 2013, Rosh Chodesh Elul.

According to Deputy Defense Minister (Likud) Danny Danon, who visited the site, it represents a major step in the true sharing of the military burden via ahavas chinam and bringing people closer to one another. The graduates of this chareidi program will serve three years in the IDF in the Netzach Yehuda (Nachal Chareidi) combat brigade.