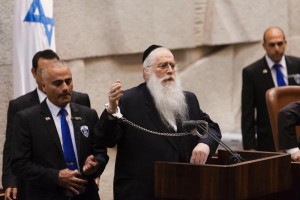 Two pressing issues in Israel seem to occupy Finance Minister Yair Lapid of late; the drafting of bnei Torah and the elections of two chareidi-affiliated Chief Rabbis of Israel.

In his view, the Knesset plenum session last week in which the draft bill was passed in his first reading was a “circus” due the chareidim. He points out they sang, blew the shofar, tore kriya and MK Meir Porush handcuffed himself to the podium. The Knesset ushers had to busy themselves with unlocking him and removing him after the stunt.

“If Porush wishes to handcuff himself to the podium then he should be left there” Lapid stated.

Regarding the election of Chief Rabbi David Lau and Rishon L’Tzion Yitzchak Yosef, he added “I must admit that I was not overly involved in the Chief Rabbinate election but the election of two Orthodox rabbis pains me for there are others streams in Jewry including the dati-leumi, Reform, Conservative and others. We have not been sentenced to another ten years of the same status.”

“The time has come for civil marriage for the many non-Jews and those Jews wishing to wed without rabbinical involvement. It will be a dirty political war, perhaps a prolonged one but we will wage the war because there is a future (Playing on the party name, Yesh Atid). We will fight as the party battles for what it believes, unyielding and with tenacity until the objective is achieved.”