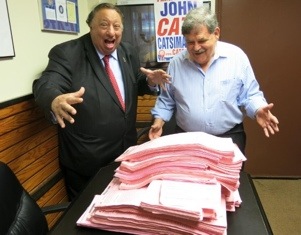 They might be the forgotten ones, but the Republicans also have a primary to choose their nominee for mayor in hope to maintain power after 20 year of consecutive Republican control. Below the radar, Republican candidates John Catsimatidis and Joe Lhota have both been spending a lot of time courting voters in southern Brooklyn, a Republican stronghold, in recent days, The Brooklyn Eagle reports.

With six weeks to go before the Sept. 10 primary, both Catsimatidis and Lhota are pulling out all the stops in an attempt to get the marginal deciding vote in what seems to be a dead heat at this point.

On June 29th, Catsimatidis held a ribbon cutting ceremony to mark the grand opening of his new campaign office in Bay Ridge. This marks the eighth office the candidate has opened in the city and the second in Brooklyn, according to his campaign.

The candidate was joined at the ribbon cutting by his wife Margo Catsimatidis and by Brooklyn Republican Party Chairman Craig Eaton and Assemblywoman Nicole Malliotakis (R-C-Bay Ridge-Staten Island), both of whom have endorsed his bid for mayor.

“The largest percentages of Republicans in the city are in southern Brooklyn,” Ms. Malliotakis told the Brooklyn Daily Eagle. “It shows the attention John has given to our community in this campaign. He has talked about the issues that matter to the people of our community; the B37 bus, property taxes, high water bills, the high tolls on the Verrazano Bridge. It shows that Brooklyn will get his full attention when he becomes mayor,” Malliotakis said.

Meanwhile, Joe Lhota was also trying to woo southern Brooklyn voters over the weekend. He was the guest of honor at a barbeque hosted by the Brooklyn South Conservative Club at MCU Park in Coney Island prior to the Brooklyn Cyclones game on July 28.

Mr. Lhota joined GOP City Council John Quaglione, David Storobin, Anthony Testaverde, and Andy Sullivan. All of the candidates above were endorsed by the Conservative Party in addition to their Republican line, giving Mr. Lhota at least one spot on the ballot regardless of the outcome in the GOP primary on September 10.