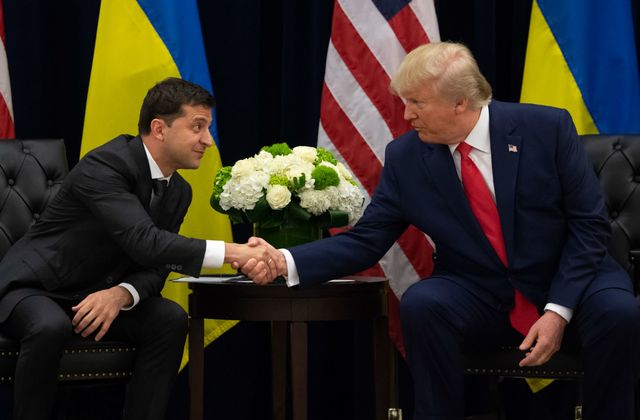 When Ukraine elected its first Jewish president, Vlodymyr Zelensky, by a landslide victory in April, 20-year-old Arkady Kesselman backtracked on his plans to leave Ukraine for the West, according to a Jewish Telegraphic Agency article on Tuesday.

“I have new hope now,” Kesselman told the JTA. “I’m glad a Jewish person can get elected to [be] president here, but I believe he will be successful regardless. I’m staying.”

In light of Zelensky’s win, some Jews say that Ukraine is a wonderful country to be Jewish these days and there is almost no anti-Semitism compared to other countries in Europe. In fact, there was little anti-Semitic rhetoric during Zelensky’s campaign.

However, according to the JTA report, not all is rosy for Zelensky and Ukrainian Jews. Ukraine is a country fraught with long-standing problems – war with Russia, lack of economic stability, corruption, nationalism, and then, of course, there’s the latest imbroglio of US President Donald Trump’s now-infamous phone call with Zelensky and what he did or didn’t say.

And Zelensky’s campaign promises will be difficult to fulfill. He promised to end Ukraine’s war with Russia as well as crack down on corruption. As he told Trump in July: “We wanted to drain the swamp here in our country.”

“I say this regretfully, but there is no way Zelensky can deliver on his promises, and certainly not on the exaggerated hopes and expectations placed on him by others,” Viktor Skarshevsky, a well-known Jewish economist from Kyiv, told the JTA. “He’s basically been lifted up to be knocked down.”

“Most people don’t think of Zelensky as a Jew, just a popular actor,” said Vlodymyr Zeev Vaksman, the 38-year-old chairman of Odessa’s Tiferet Masorti community. But if he fails, “they will be looking for someone to blame. Maybe Jews.”

Yevgeniy Romenovich, a 41-year-old information technology adviser from Kyiv, said: “When Zelensky fails, they will think of him as the Jew and take revenge against the Jews,” he said. “As the masses cheer, the Jews should prepare for pogroms.”

Israel certainly doesn’t have a rosy view of Ukraine for its 300,000 Jewish residents. Last year, the Israeli government pointed a finger at Ukraine in its annual report for 2017 as a hot spot for anti-Semitism. The report said that anti-Semitic attacks had doubled in the country since 2016. “A striking exception in the trend of decrease in anti-Semitic incidents in Eastern Europe was Ukraine,” the report said.

Another issue in Ukraine is the glorification of Nazis and Nazi collaborators, which prompted condemnation of Ukrainian legislation by 50 US Congress members in 2018. “It’s particularly troubling that much of the Nazi glorification in Ukraine is government-supported,” the bipartisan letter to Deputy Secretary of State John Sullivan stated, providing examples of ceremonies and legislation celebrating Nazi military units and other militia who fought together with the Nazis.

So apparently all is not rosy for the Jews in Ukraine despite Zelensky’s resounding win. And whether a Jew in a high position will improve matters remains to be seen. Unfortunately, Ukraine has a long history of not just anti-Semitism but brutal violence and pogroms and it’s in the best interest of the Jewish community to remain wary.