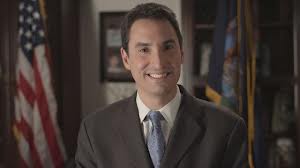 Democratic Rockland County Executive candidate, Dagan Lacorte has, so far, not managed to secure his name on the September ballot, after being pushed off by the Board of Elections. Despite the uncertainty, Suffern mayor Dagan Lacorte is not letting time go by, in the race for Rockland County Executive, without making an effort courting Jewish votes, despite the fact that his chief opponent, Ilan Schoenberger, is seen as the favorite by the Hasidic Establishment.

Days after the Lacorte campaign released a 50 ideas plan, a bi-lingual pamphlet hit the mailboxes of thousands of registered Jewish Democratic voters, YWN has learned.

The pamphlet does not address particular issues as it pertains to the Jewish community, rather a wide range of issues that are at great concern to voters, in general.

The mailer, as seen below, lists on one side the chronic problems with which the County is plagued, while the front panel introduces Dagan Lacorte and his positive record as Mayor of Suffern, NY.

“We are making an effort to reach all voters of all backgrounds and communities regardless how political insiders say people are going to vote”, Mr. Lacorte told YWN. “There are many things that unite the residents of this County and it’s time to bring us all together for structural change.”