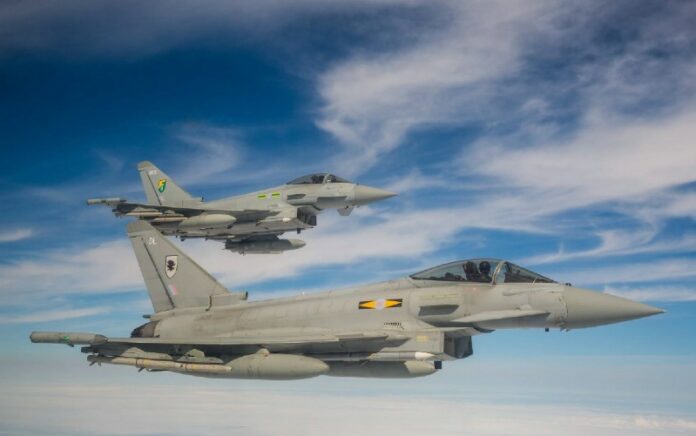 According to multiple reports, the plane did not respond to British authorities’ attempt to contact it due to a communications malfunction, and had lost radio contact over south-east England.

The fighters from RAF Coningsby in Lincolnshire were cleared go supersonic because of the emergency.

The booms were heard in the early hours across London, Hertfordshire and Bedfordshire.

The pilot praised the speed of the RAF response, but said he was shocked when he first saw the fighters.

“Amazing how fast the RAF reacted. I applaud them for that.”

He said the crew was busy checking frequencies when the radio came back online and had not noticed the RAF fighters.

“I looked left and about had a heart attack when I saw one – so close – strobes on and with blueish ‘glow strips’ along the side of his fuselage.

“We flashed our landing lights to acknowledge and established radio contact on ‘guard’… with the fighters.

“We were already talking to London control at that point.

“They remained with us for about five minutes.”

He said the empty aircraft eventually landed safely in the US.

And here's the 767 that lost communication N725SH…. Formerly El Al but looks like now owned by aircraft leasing company. pic.twitter.com/C2S1jHi5ss

The sonic booms woke people at about 04:20 GMT – with houses shaking and reports of police sirens sounding immediately after.

The Metropolitan Police subsequently confirmed the bang was the result of the RAF aircraft being cleared to go faster than the speed of sound.

“The aircraft was intercepted and its communications were subsequently re-established.”

The loud bang heard throughout north London and surrounding areas was the result of a sonic boom from RAF planes. There is no cause for concern.