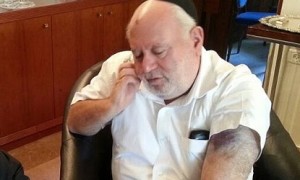 According to a Kikar Shabbos report, Reb Aryeh told the Gadol Hador “They tell me that because I listen to the piskei Halacha of Gavaad Rav Sternbuch Shlita I am a rosh m’rusha”.

Rav Yeshaya Epstein explained the details of the controversial construction in Beit Shemesh to Rav Chaim. He told them that signs of kvura were discovered in the building site and this prompted the Eida Chareidis and Asra Kadisha to oppose the construction. Rav Epstein explained that of late a kenos of the buyers was held and there was a decision that enjoyed overwhelming support to accept all the piskei Halacha of Ravaad Rav Moshe Sternbuch Shlita in the matter.

Reb Aryeh removed his jacket and rolled up a sleeve to show Rav Chaim his bruises from the beating last week. Rav Kanievsky gave him a warm bracha for continue success, clearly standing behind his continuing with the project.

Click HERE to see the many pashkavilim pertaining to the ongoing battle against the Beit Shemesh construction.