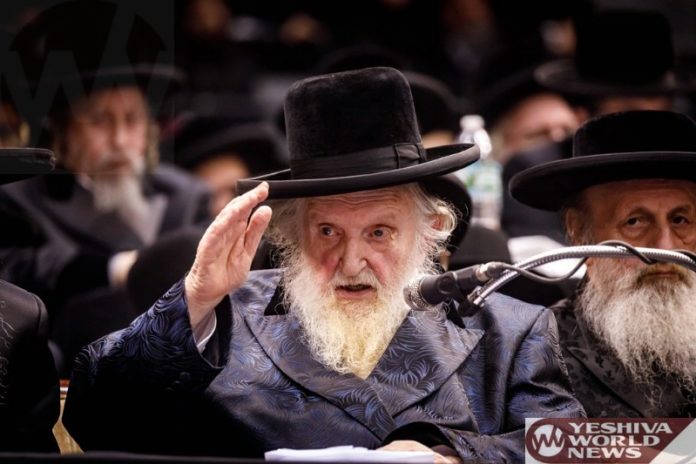 Hagaon Harav Moshe Shternbuch ruled that Shomrei Torah should wait a set amount of time before using the new fast train from Jerusalem to Tel Aviv – a shiur “b’kdei shey’aa’seh” – the amount of time that the train could have been completed without the chillul Shabbos that took place during its construction.

A B’Chadrei Chareidim report said that when the train began running last Motzei Shabbos, rabbanim approached Harav Shternbuch to ask whether there was a halachic issue with riding the new train – due to the unfortunate fact that its completion involved massive chillul Shabbos – in light of the halacha of benefiting from a “maa’seh Shabbos” before enough time had passed “b’chadei she’ya’asu” – the amount of time it could have been completed without chillul Shabbos.

“The government here in Eretz Yisrael desecrated Shabbos Kodesh in public when it employed foreign workers (nachrim) to dig the tunnels for the train,” HaRav Shternbuch wrote. “I was asked to decide if it’s forbidden to ride on the train which travels in the tunnels which were dug on Shabbos, and if the issur would be for always or only for the amount of time it would have taken [to complete the train] if they hadn’t worked on Shabbos Kodesh.”

“The fact that they dug the tunnels in the public domain, which is land that belongs to Shomrei Torah, and they could have dug them in a permissible way during the days of the week – doesn’t forbid us from using the land which belongs to us as well. However, although [their chillul Shabbos] doesn’t forbid us from benefiting from it for always, it’s still forbidden for us to benefit from the time they saved due to the work the foreign workers completed on Shabbos, and therefore it’s necessary to wait the shiur of “b’chadei she’ya’asu.”

“And in the matter of what the shiur of “b’chadei she’ya’asu” is, it’s necessary to wait the amount of time that the [possibility] of riding of the train was moved forward due the chillul Shabbos [in digging] the tunnels. And if without the digging that they did on Shabbos, it wouldn’t have been possible to ride the train for only another few months from the time that it is now possible, it’s necessary to wait and not ride on the train until the time that it would have been possible to ride it even without the digging they did on Shabbos Kodesh.”

“And if we don’t know the amount of time that the possibility of riding the train was moved forward due to chillul Shabbos, then it’s like the din explained in the Shulchan Orech (סי’ שכ”ה ס”ז) and in the Mishnah Breura there, which is uncertain if it’s necessary to wait the shiur of “b’chadei she’ya’asu,” (and like it’s uncertain if the nachri did the work for the Jew or for himself). One should be machmir to wait the shiur of “b’chadei she’ya’asu,” and only in “sha’as hadchak” (time of need) or for the sake of a mitzvah, one can be lenient.”