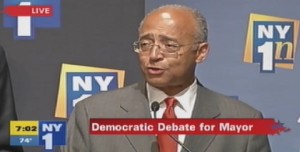 Speaking with the Long Island Jewish World newspaper, during a visit to the JCC of Rockaways, Democratic mayoral candidate Bill Thompson was asked if he thought a block of Jewish voters might give his candidacy the momentum to win.

“I’m going to work hard to attract the support of all voters,” Mr. Thompson responded. “The Jewish vote in the city of New York is definitely a vote I’m going after. It’s not the only vote. [But] Jewish voters are important.”

George Artz, a Democratic political consultant, said Thompson has a good shot to win it all. “His chances are
very good. He’s in the running for a run-off,” said Artz. “He’s battling [New York City Public Advocate] Bill de Blasio for the second spot. He will do well in the Orthodox community. They know him and like him.”

Artz said Jewish voters find his candidacy attractive because he comes across as a rational and thoughtful man. “It means they feel they have access to him, and he’s reasonable to deal with,” said Artz.

Unlike Bill de Blasio who’s running a racial campaign by focusing on themes that allowed Barack Obama to gain the liberal and minority support, Mr. Thompson is running a more mild and general campaign aimed at courting voters from all color and all background.

In fact, in an opinion piece on The Grio blog, Mr. de Blasio’s candidacy is viewed as a replay of the Obama campaigns. “De Blasio’s success or failure will offer an interesting look at politics in a post-Obama era,” Penny Bacon jr. writes.

By running as the most liberal advocate in the race, promising to end Stop-and-Frisk and taxing the rich, Mr. de Blasio has stopped Thompson from unifying the city’s black leadership. He has won the endorsements of one of the city’s black congresswomen, Rep. Yvette Clarke, as well as some of the Rev. Al Sharpton’s close allies, leaving open the possibility that Sharpton, who backed Thompson in 2009, might also opt for de Blasio.

Even if black voters will at the end vote for a traditional AA candidate, “Mr. de Blasio is giving us an interesting look at what a campaign would look like in a “post-racial era,” or at least one in which traditional ethic politics (blacks vote for blacks, Jews for the Jewish candidate) were not so dominant,” Bacon writes. “It might be a preview of a future presidential campaign. (Imagine in 2016, if Hillary Clinton did not run, and Maryland Gov. Martin O’Malley faced Cory Booker, and O’Malley cast himself as the more liberal candidate and one who views best reflected those of blacks.)”

Read the LI Jewish World Profile of Bill Thompson below: