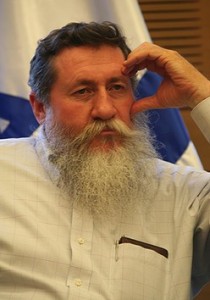 Former MK Yaakov Katz (Ketzaleh) is calling on Bayit Yehudi leader Naftali Bennett to exchange Yair Lapid and his Yesh Atid party for the chareidim who are now in opposition.

Katz wrote on his Facebook page on erev Shabbos, 10 Elul 5773 “We are reportedly warned of the threats in the framework of an interim agreement [with the PA] concocted by Bibi, Livni, Kerry, and Abu Mazen which chas v’sholom will result in uprooting yishuvim such as Har Bracha, Einav, Shavei Shomron, Elon Moreh, Yitzhar and Itamar.”

“Naftali Bennett erred when he believed the talks conducted by Tzipi Livni would not lead to something. Lessons learned from the past tell us we may not remain in such a government until it is too late.”

He then continues, instructing Bennett to get rid of Yesh Atid with its 19 seats and replace the party with the chareidim which have a combined 18 seats.

He also advises Bennett to insist on being an integral part of the negotiations as is Livni, thereby permitting him to monitor the talks first hand and prevent such a deal from becoming a reality.