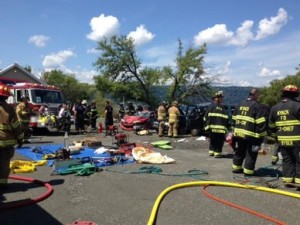 Suburban New York emergency workers have sharpened their skills by practicing for a scary scenario: a commercial jetliner crashing into a pier and breaking apart in the Hudson River.

The Journal News reports about 300 rescue workers from various agencies participated in Saturday’s drill. It was in Piermont.

In the simulation, they were told a 747 had plummeted into the Piermont Pier en route to LaGuardia Airport. It’s about 25 miles away.

The rescuers had to rehearse responding to fires burning, people crammed into wrecked cars and people in the water. Four hypothetical victims had to be pulled up from inside a submerged pipe that stood for the plane’s fuselage.