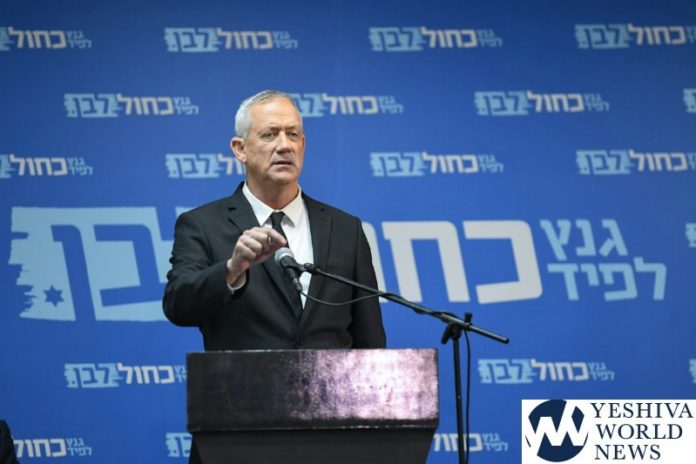 Leader of the Blue and White faction in the Knesset, MK Benny Gantz, said that he will bring Trump’s “Deal of the Century” to the Knesset and attempt to pass it in its entirety into law next week.

Speaking at the National Security Research Institute conference on Wednesday Gantz said: “The peace plan faithfully reflects the basic principles written in the Blue and White party’s platform. This is a historic opportunity to shape Israel’s borders and future. This is a historic opportunity to shape the borders and future of the State of Israel, to find a solution to the conflict instead of managing the conflict. After a decade of paralysis, it’s time – and friends, we must move forward.”

Additionally, Gantz attacked the Prime Minister during his speech. “The Deal of the Century is the second significant historical event that occurred this week, the first being when an indictment was made against an incumbent Prime Minister for bribery, fraud, and breach of trust. The immediate implication is that defendant Netanyahu cannot serve another day in office with the charges, lawyers, testimonies and the obvious fear of going to jail. We wish him success in court. To implement the Trump program, an honest, reliable and available Prime Minister is required to run the state.”

“I call on the Palestinian leadership – since the Hebron agreement, which Arafat and Netanyahu signed, you have become recalcitrant. Just once say ‘yes’ and give your children hope for a better future. Don’t miss another chance for peace,” Gantz added.

Sources within the Likud party, which saw the statements as presumptuous of Gantz as trying to wrestle control and leadership from the Prime Minister and issued the following statement. “Gantz is trying to hitch a ride on the tremendous achievements that Prime Minister Netanyahu has brought after three years of strenuous work with the Trump administration. This is a joke.”