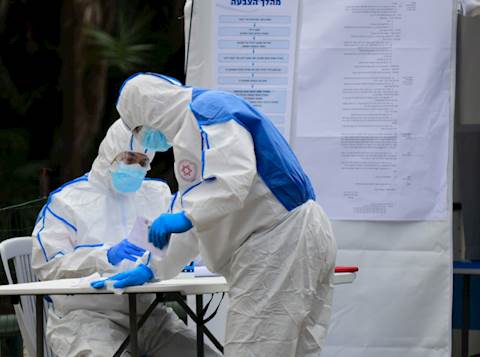 An American Jewish woman from New York City who visited Israel from February 23 -27 was diagnosed with the coronavirus on Wednesday night, Israel’s Health Ministry stated.

The woman, in her 50s, stayed in Jerusalem and was at many local cafés, restaurants, stores and a bank and traveled on local buses and the Jerusalem-Ben Gurion train line.

The Health Ministry has published a detailed list of the places the woman visited and the times she was there and has instructed anyone who was present in the same areas at the same time to self-quarantine for 14 days.

The full list of places and times the woman frequented while in Israel:

– On Tuesday, February 25 between 2 p.m. – 3 p.m., she was at First Station on Rechov David Remez 4 in Jerusalem at the Kitchen Station restaurant.

– On Wednesday, February 26 between 9 a.m. – 10 p.m., she as at Bank Mizrachi Tefachot Mortgages on Rechov Heleni Hamalka 9 in Jerusalem. She was at the Fox Home and Tzomet Sefarim stores and Osher Ad supermarket at the Hadar Mall in Jerusalem from 11:30 p.m. – 2 p.m.

The woman is a “close contact” of the Westchester man who was hospitalized in NYC after being diagnosed with the coronavirus. His name for Tehillim is אליעזר יצחק בן שפרה (Eliezer Yitzchok ben Shifra).

Anyone who self-quarantines and begins having symptoms of fever, coughing or breathing difficulties should immediately call the MDA 101 line to clarify if a COVID-19 test is necessary.