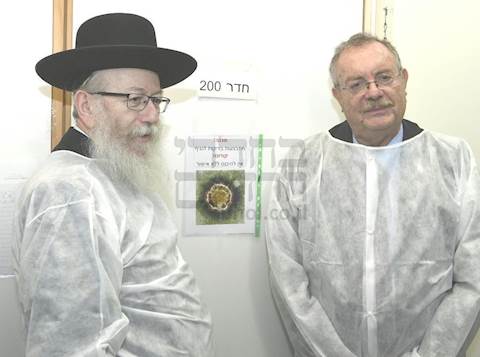 There are 6,808 confirmed cases of the coronavirus in Israel as of Thursday evening, including 107 in serious condition, 83 of whom are hooked up to respirators.

Israel recorded its 34th fatality on Thursday evening when a 98-year-old woman passed away in Hadassah Ein Kerem Hospital in Jerusalem.

Israel’s number of fatalities rose to 33 by Thursday afternoon, after five Israelis, all men over 72, passed away overnight Wednesday and two on Thursday, a 90-year-old man at Ichilov Hospital in Tel Aviv and a 77-year old man at Barzilai Medical Center in Ashkelon.

The man, a former resident of the Mishan nursing home in Be’er Sheva, is the third fatality from the facility, which has suffered an outbreak of the virus.

As of Thursday morning, Israelis are required to wear masks when venturing out in public to take care of essential needs, Netanyahu announced on Wednesday evening.

Health Minister Yaakov Litzman, who tested positive for the coronavirus on Wednesday along with his wife, is only having light symptoms and is working from home, a top ministry official said on Thursday.

Litzman 71, the most senior Israeli government official to be diagnosed with the virus, has had dozens of meetings with many top officials in the past two weeks, sending a slew of public servants into self-quarantine, including Prime Minister Binyamin Netanyahu.

Netanyahu just came out of quarantine on Wednesday night, after 14 days had passed from his last meeting with his Chareidi affairs advisor, who tested positive for the virus last week. The prime minister entered self-quarantine again on Thursday and will remain in quarantine until Wednesday, leil Pesach.

Moshe Bar Siman-Tov, Director-General of the Health Ministry, is also entering self-quarantine. Bar Siman-Tov said that the ministry had prepared for this situation and planned accordingly.

“Bar Siman-Tov will remain in quarantine in a specialized facility with a workspace and the necessary communication equipment,” the ministry stated on Thursday morning, adding that Litzman’s entire staff in the ministry will enter self-quarantine and will continue to work from their homes, maintaining contact with Litzman through digital means.

Prof. Sigal Sadetzki, the head of Public Health Service at the Health Ministry and Director of Hadassah Hospital, Prof. Ze’ev Rotstein, who both met with Litzman this week also entered self-quarantine.

Mossad chief Yossi Cohen and head of the National Security Council Meir Ben-Shabat also met with Litzman this week and both entered self-quarantine on Thursday.

Israelis donated over half a million dollars in 24 hours for the “coronavirus orphans” – the 4-year-old twins of Tamar Peretz-Levy of Lod, who passed away from the coronavirus earlier this week. The father of the twins died of a heart attack a year after they were born.

The longest El Al flight in history, over 17 hours, ended on Thursday morning when an El Al plane landed in Melbourne to repatriate about 280 Israelis stranded in Australia and New Zealand. The flight took off to Israel about 2 p.m.and is scheduled to land at Ben-Gurion on Friday morning at about 7:30 a.m.

There were a total of 21 new confirmed cases of the coronavirus in the Palestinian Authority in the last 24 hours, raising the total number of confirmed cases to 155 as of Thursday.

That bossy Israeli toddler is also getting famous pic.twitter.com/ICLI6xastk