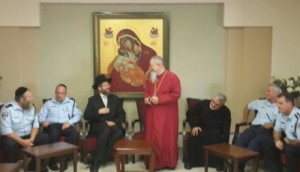 A meeting was held between senior Israel Police rabbonim, Chief Ashkenazi Rabbi David Lau and the Archbishop serving in Haifa. The church planned a Christian march event on Yom Kippur. Mayor Yonah Yahav called on residents to exhibit religious tolerance and respect. However, Chief Rabbi Lau and the police rabbonim felt one can be respectful and request canceling the public event set for the holiest day on the Jewish calendar.

Israel Police Chief Rabbi of the Northern District Rabbi Anshel Friedman initiated the move to approach the senior Christian clergyman, for he feels holding a Catholic march in the city on Yom Kippur was not an ideal situation. He and Israel Police Chief Rabbi Moshe Gafne contacted Rav Lau and they met on Thursday morning, 8 Tishrei5774 with the archbishop.

The rabbinical delegation arrived at the home of the archbishop in the Geffen neighborhood of Haifa. The church official informed the rabbis that their request has been accepted and notification was being made to all churches that the planned event will not be held to avoid offending the religious sensibilities of the Jewish community.