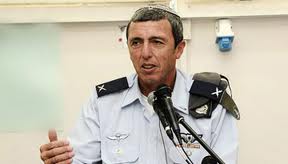 IDF Chief Rabbi Brigadier-General Rabbi Rafi Peretz sends a message on what he believes Sukkos means to the military and the Jewish People.

“For seven days a year, we leave our permanent homes and live in temporary ones. We take a break from our routines and move into the Sukka,” the Chief Rabbi of the IDF, Brig. Gen. Rafi Peretz, wrote to IDF soldiers in his Sukkos message. Thousands of IDF soldiers – from the southern regions’ Givati Brigade to the northern Golani Brigade – will be doing just that, spending the holiday on base and celebrating in sukkas built especially for the holiday.

Sukkos is about equality, one of the core values of the IDF: the belief that everyone should have an equal chance regardless of his or her background. “We bring this feeling of equality to life with the waving of the arba minm,” the Chief Rabbi wrote. Each one of the species represents a different type of person, and a different type of IDF soldier. “The lulav, aravah, hadas and esrog are all different from one another: the esrog has flavor and scent, the aravah has no flavor and no scent, the lulav has only flavor and the hadas only scent. So too the People of Israel and the soldiers of the IDF – there are people with different qualities and different talents, without which we would not be able to coexist. Yet we bless the four species separately only after we have united them all together. Everyone is needed for our national endeavor.”

The IDF’s success in battle and in protecting the State of Israel is not just about physical strength, Rav Peretz. It’s about the mental and spiritual strength of the IDF’s soldiers. “The sukka, a flimsy and temporary structure, shows us that our security is entrusted not only to physical means, but also to the spirit of the People of Israel that has been pulsing in its veins for many generations. We triumph in wars with physical means and thus we shouldn’t undervalue them, but we know that without help from above and faith in the justice of our path, we would not succeed in reaching the national achievements that we have reached in our time. Without them we would not be able to overcome the challenges that we will face in the future.”

“By dwelling in the open Sukka, we remember the tents of war in which our ancestors dwelled during the battle for this land,” Peretz wrote. “They were a nation of slaves that escaped to freedom, ready to depart into the unknown, living in temporary huts in the desert for 40 years.” The sukkas that we build as the IDF show us that we are the latest stage in a chain “of a free people willing to sacrifice everything for the building up of the people in its land.”

Rabbi Peretz addressed soldiers directly at the end of his message. “On every base, unit and post, there is a sukka. It is often a brittle structure, but also full of strength. And you, dear soldiers, provide it with its strength. Sitting together in the sukka, all of us together as one person with one heart, ready for every mission and every challenge, give the sukka its festive atmosphere which we longed for and anticipated throughout our long exile.”

The IDF wishes all of its soldiers and all of our supporters around the world, a Good Yomtov.