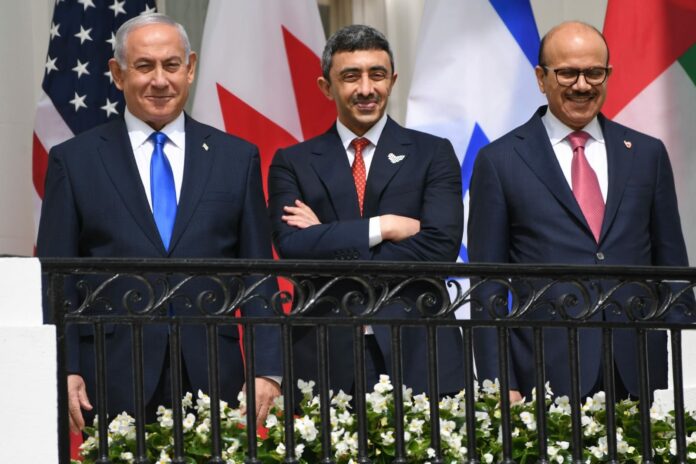 President Trump on Tuesday declared the “dawn of a new Middle East” as he presided over the signing of two historic Middle East diplomatic deals between Israel and two Gulf nations.

“We’re here this afternoon to change the course of history. After decades of division and conflict we mark the dawn of a new Middle East,” he said at the ceremony in the South Lawn of the White House.

“Thanks to the great courage of the leaders of these three countries, we take a major stride toward a future in which people of all faiths and backgrounds live together in peace and prosperity,” he said.

The deals between Israel and the United Arab Emirates, and Israel and Bahrain, involve the exchanging of ambassadors, establishment of embassies and co-operation on a range of fronts — including trade, security and tourism. The agreements, known as the “Abraham Accords” also allow Muslims to visit Islamic holy sites in Israel. Trump said the deals would form “the foundation for a comprehensive peace across the entire region.”

Earlier in the Oval Office, Trump said “we’re very far down the road with about five additional countries.” He declined to name the countries he is speaking with and later said it could be “five or six” other countries.

Israeli Prime Minister Benjamin Netanyahu and the foreign ministers of both the UAE and Bahrain were present to sign the deals at the ceremony. Trump signed onto each one as a witness. The leaders also signed a separate trilateral declaration of peace.

Sheikh Abdullah Bin Zayed Al Nahyan, UAE’s foreign minister, said “we are already witnessing a change in the heart of the Middle East, a change that will send hope around the world.”

While critics have noted that such deals ignore Palestinians and the Israel-Palestinian conflict, it is hoped that the deals would be the start of warmer Arab-Israeli relations.

EARLIER REPORTS ARE BELOW:

President Trump will preside over the signing of two historic deals between Israel and two Gulf nations at the White House on Tuesday – a ceremony that will burnish Trump’s foreign policy credentials as he seeks reelection.

About 1,000 guests were invited to attend the ceremony at the White House South Lawn on Tuesday at noon for the historic signing of the peace accords between Israel and the United Arab Emirates and Bahrain.

Prime Minister Binyamin Netanyahu‏‏ has a meeting with US President Donald Trump prior to the ceremony at 11 a.m, followed by a four-way meeting between Trump, Netanyahu and the foreign ministers of the UAE and Bahrain, Abdullah bin Zayed Al Nahyan and Abdullatif bin Rashid Al Zayani, who are signing the accords for their countries.

Israeli media reports said that the agreement between Israel and the UAE is a “peace treaty,” a comprehensive agreement with international legal status that must be ratified by the Israeli cabinet and Knesset before it is final. The agreement with Bahrain is a “declaration of peace” which has no official legal standing but is rather a joint statement of the two countries’ commitment to peace.

The ceremony will begin with the official signing of the accords, followed by speeches and the playing of the countries’ national anthems and will be concluded with a dinner. The wearing of masks at the outdoor event will be encouraged but will not be mandatory.

Honoured to attend this historic event, which reflects immense effort by courageous leaders in Israel, the Arab world & the US. Also reflects many individuals & groups dedicated to peace & fairness in the Middle East including @Friendsisrael, @jhrwatch, @SussexFriends, @mishtal. pic.twitter.com/GnoWJzudf7

US President Donald Trump will sign the accords as an observer, according to a statement by a senior White House official on Monday. The text of the peace deals will only be revealed to the public after the signing.

Hungarian Foreign Minister Péter Szijjártó will be the only European Union diplomatic representative to attend the signing. Democratic leaders have been invited to the ceremony and a “nice amount” is reportedly expected to show up.

A visibly excited Netanyahu holding copies of the peace accords posted a video on Monday night to the Israeli public: “I’m holding the copies of the historic peace accords with the UAE and Bahrain in my hand,” he said. “We worked on this for many many years. This moment is arriving tomorrow.”

“This is a tremendous turning point in Israeli history as well as the history of the Middle East. It will have a significant and positive effect on all Israelis. I also promise you, from what I see here, that more countries are on the way.”

Netanyahu concluded the video by reassuring Israelis that he hasn’t forgotten the difficult times they are enduring and he is continuing the battle against the coronavirus.

On a lighter note, below is a video of the Pirchei Yerushalayim choir singing a “song of peace” in Hebrew and Arabic in honor of the peace agreements.