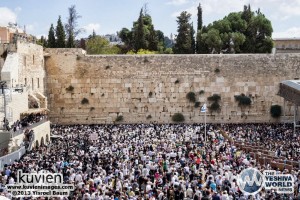 Rosh chodesh in recent months has been accompanied by confrontations between the chareidi tzibur and the Women of the Wall organization, which over the past decades has been quietly doing its thing at the Kosel on Rosh Chodesh. There can be no doubt that the recent monthly confrontations have benefited the women for negative publicity is still publicity. In addition, the organization has gained significant worldwide support, depicted as the underdog and victims of religious discrimination by “fanatic ultra-Orthodox elements”.

This erev Shabbos is rosh chodesh once again, Marcheshvan, and the Women of the Wall plan to do their thing, at 07:00. Unlike the case in recent months, the organization is not running buses from areas around the country to bring in supporters.

On that same note, Kosel Rav Rabbi Shmuel Rabinowitz is calling on the frum community not to send bnos yeshivos to the Kosel for shachris, a move apparently intended to restore the former status quo, that a small number of women hold their monthly service out of the media spotlight.

In his statements to the press, Rabbi Rabinowitz cited the women will return for their “monthly provocation”, pointing out they rejected the compromise solution of Minister of Religious Service Naftali Bennett. Bennett designated a new area of prayer, at Robinson’s Arch, to permit non religious Jews to conduct their services in line with their wishes.

The rabbi adds that due to increasingly tensions surrounding Hay Habayis, he thinks it would be best for the frum tzibur at large to permit the rosh chodesh event pass without a ruckus. Jerusalem Police commanders, who are concerned over the recent escalation in Har Habayis confrontation, are calling on the frum community to refrain from calling for a large rosh chodesh showing.