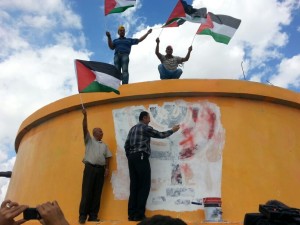 It did not take long after Attorney General Yehuda Weinstein announced that PA (Palestinian Authority) residents may come back to the area of the former N. Shomron community of Chomesh before the PLO flag was flying and the effort to erase the Jewish past began.

For the PA and its residents, where hate for Jews and Israel is a way of life, the PA residents raised their flag and immediately began painting over the menorah, which adorned the area water tank for many years, symbolic of the community.

Chomesh, like nearby SaNur and Gush Katif in Gaza were uprooted by the Ariel Sharon government in 2005, as part of the prime minister’s master “Disengagement Plan” that was to bring peace and quiet between Israel and its Hamas neighbor in Gaza. Once again, placing our hopes in faith in the nations of the world instead of HKBH has yielded disastrous results, with Gaza now Hamastine, a satellite arm of Iran and Hizbullah.

Former Settlement Council leader Danny Dayan used his Facebook page to comment, stating this is yet another example of how Israel’s peace partner acts upon entering an area that was once a Jewish community.

Dayan blasted the “immoral government” which permits such acts, permitting Arabs to take over portions of Eretz Yisrael.