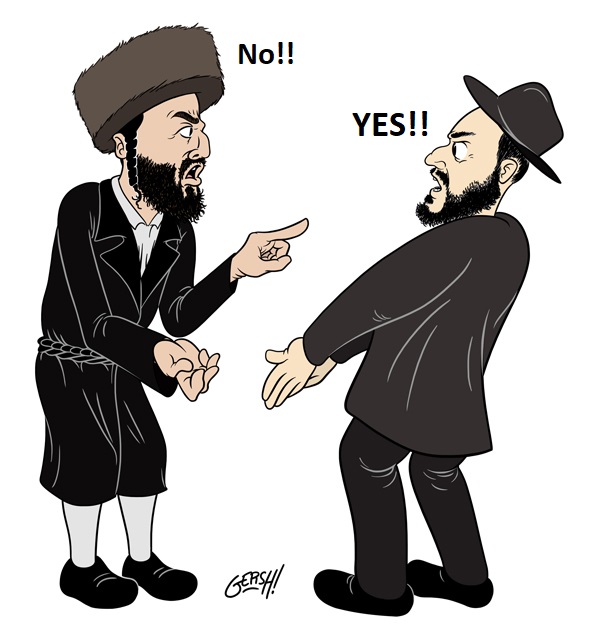 One of the general differences between Litvaks (Misnagdim) and Chassidim lies in what they do on the holiday of Shmini Atzeres regarding eating in the Sukkah. Chassidim have traditionally taken a more lenient view than their Litvak counterparts on the issue. It should be noted that each of the two opinions should be respected.  Rav Tzaddok HaKohen, in his work Maishiv Tzedek,  writes that those who do not eat in the Sukkah on Shmini Atzeres do have a basis in the Gemorah and the Yerushalmi.  In this article, an attempt will be made to explain the halachic basis of each of the two customs.

The Torah tells us that we must dwell in the Sukkah for seven days.  The Torah further tells us that on the eighth day we have a new and different holiday.  Thus Sukkos only lasts for seven days, according to the Torah and the eighth day is an additional holiday, in and of itself.  By Rabbinic decree, of course, we add on a second day to each of the Yomim Tovim for those who dwell outside of the land of Israel.  This creates a halachic problem for the holiday of Shmini Atzeres.  Do we eat our meals in the Sukkah or do we eat them in the home?  It is a subject that was disputed in the Talmud, may be a debate between the Yerushalmi and the Bavli, and the subject of sharp debate between Chassidim and Misnagdim to this day.

It is also interesting to note that while there may be debate in regard to the practice of eating in the Sukkah, all agree that we do not take a Lulav on Shmini Atzeres — even without a bracha.  The Baalei Tosfos (47a “Maisav”) explain that since a Lulav would be Muktzah on Shmini Atzeres, it would clearly demonstrate that he is treating Shmini Atzeres like Chol, whereas, in regard to eating in a Sukkah, the act is not so noticeable because many people like eating in a Sukkah.  As we will discuss later in this article, it is this Tosfos (and the Rosh) that may be the source for the leniency of the Chassidish world.

The Gemorah (Sukkah 47a) cites a dispute between Rav Yochanan and others in the name of Rav as to what is done on the eighth day outside of Israel regarding eating in the Sukkah.  There are two versions of the dispute, but the Gemorah’s final conclusion is that we dwell in the Sukkah but we do not recite a blessing upon it.

The Rishonim approached this Gemorah in three different ways. It is not just this Gemorah, but the combination of three differing sources:  This section of the Talmud Bavli, a Talmud Yerushalmi, and a Midrash Tanchuma.  The Midrash Tanchuma (Parshas Pinchas #15) asks, “Why did the sages permit leaving the Sukkah on the last day of the Yom Tov?  Because the entire Yom Tov we pray for dew and on the last day we pray for rains — therefore, they leave the Sukkah on the last day of the Yom Tov so that they will be able to pray with a full heart.”  There is also a somewhat enigmatic Talmud Yerushalmi (Sukkah 4:5 and Brachos 6:6) that states, “If someone enjoys his Sukkah, he may make kiddush on the last night of Yom Tov in his home and then arise and eat in his Sukkah.”

The majority of Rishonim understand the Gemorah in the Bavli as mandating that both of the meals of Shmini Atzeres be eaten in the Sukkah.  This is the view of Rashi (cited in Sefer HaPardes), the Raavya, Maharam MiRottenberg (See Tashbatz 147) Rabbeinu Chananel,  the Sefer HaMinhagim, and the SMaK.  This view is the one that has been codified in Shulchan Aruch (OC 668:1).

There are Rishonim, however, who did not eat in the Sukkah on Shmini Atzeres at night.  Apprently, these Rishonim, assumed that the Yerushalmi was also referring to Chutz La’Aretz, and attempted to resolve the Yerushalmi source and the Bavli source.  This custom is mentioned in the Tur (OC 668), the Maharil (Hilchos Lulav), the Machzor Vitri (384), and the Orchos Chaim.

Why not at night?  A good question.  Perhaps, (as it may perhaps be suggested in Tosfos 47b “Maisav”) it is less comfortable at night than in the daytime and there is also a concern of fulfilling V’samachta b’chagecha in a more ideal manner on Shmini Atzeres as well.

The Bais Yoseph suggests a different answer — that at night the blessing of Shehecheyanu is recited on Shmini Atzeres because it is its own Yom Tov.  Eating in the Sukkah would therefore highlight the inherent conflict between these two opposites.  Eating on the next day, however, would not highlight the difference so much.

The Bach gives yet a different explanation.  Indeed, he provides two different explanations.  In OC 666 he writes that according to this view, if eating were to be permitted on the night of Shmini Atzeres it would appear as if one was adding to the Torah.  The discontinuation at night resolves this perception.  In OC 668 he provides, what seems to be an opposite explanation to the first one that he gave.  He writes that since it is a Mitzvah to add onto Kodesh, if one were to eat on the night after the Torah obligation of Sukkosd, one would still require a blessing over the eating.  In this manner, of discontinuing at night, this problem is resolved.

Other Rishonim have the custom to eat half of the meal in the SUkkah and the other half in the home.  This custom is mentioned in the addendum to the Sefer HaMinhagim and is cited in the TaZ.  His father-in-law, the Bach, however, states that this custom is in direct violation of our Talmud (Sukkah 47a).

However, as mentioned earlier, the majority view is to eat all the meals in the Sukkah and that is how the Shulchan Aruch codified the Halacha.  The Mishna Brurah also writes, “And so have concluded all the Achronim, like the ruling of the Shulchan Aruch that the obligation is both at night and in the daytime.”  Who are these Achronim?  They are the Mogen Avrohom, the Eliyahu Rabbah, the Mateh Ephraim, the Chayei Adam, Maamar Mordechai, Chasam Sofer (see Ksav Sofer Responsa #120).  The Kaf HaChaim as well rules in the same manner as does the Mishna Brurah.

The Munkatcher Rebbe (Minchas Elazar IV #31), however, cites the aforementioned Tosfos (47a) as the source for being more lenient on Shmini Atzeres to eat in the home.  He writes that, “since it is colder in our countries (in Europe) it is more apparent that we would only be sitting in the Sukkah for the purpose of the Mitzvah and not merely because it would be pleasant.”  The Minchas Elazar would equate eating in the Sukkah on Shmini Atzeres in a colder climate with taking of the lulav on Shmini Atzeres.  Both should not be done because it is apparent that one is doing it for the Mitzvah.

The Aruch HaShulchan also justifies the position of the Chassidim and writes (OC 660:5) that the Chachamim ordained that the eating be in such a way that it not be apparent that he is doing so only for the sake of the Mitzvah.  He concludes, however, that ideally, one should only leave the Sukkah after the day meal.