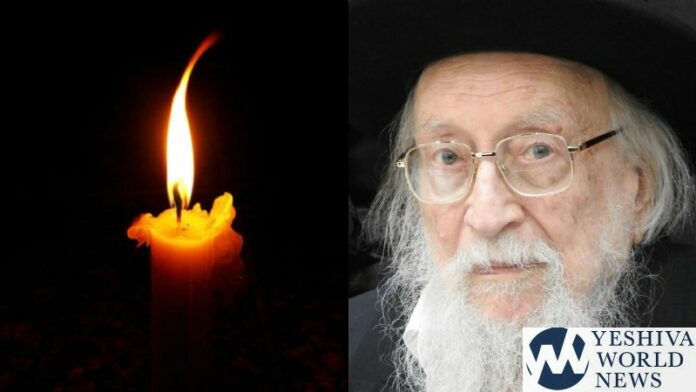 HaGaon HaRav Yitzchak Scheiner, z’tl, Rosh Yeshivas Kaminetz and member of Degel HaTorah’s Moetzet Gedolei HaTorah, was niftar of the coronavirus on Sunday at the age of 98.

The bitter news of the Rosh Yeshivah’s petirah came amid the levaya for the Brisker Rosh Yeshivah, Hagaon HaRav Meshulam Dovid Halevi Soloveitchik, z’tl, making it a particularly mournful day for Klal Yisrael and the Torah world.

The Rosh Yeshivah contracted the coronavirus a week ago, 17 days after he received the first dose of the vaccine, and was being treated at home.

On Sunday morning he suffered a deterioration in his condition and was evacuated to the hospital due to breathing difficulties.

Soon after arriving at the hospital, he suffered a further deterioration in his condition and the doctors performed resuscitation techniques. Unfortunately, he was niftar several hours later.

The entire yeshivah world, and Yeshivas Kaminetz in particular, was engulfed in mourning upon hearing the bitter news and the paroches was removed from the heichal of the yeshivah.

HaRav Scheiner, z’tl, was born in New York to parents who fled Poland several years prior to the Holocaust. The Rosh Yeshivah, z’tl, learned as a teenager in Yeshivas Rabbeinu Yitzchak Elchanan and then continued to the yeshivah of Hagaon HaRav Shlomo Heiman, Torah V’Daas.

In the 60s, HaRav Scheiner moved to Switzerland to serve as the Rosh Yeshivah of Montreux.