Yaakov Weingarten, one of the leaders of the Lev Tahor cult who is suspected of kidnapping and child abuse, was arrested by Guatemalan security forces on the first day of Pesach, YWN has confirmed.

Many of the other cult leaders have already been arrested for kidnapping and child abuse and are already serving prison sentences. The leaders’ cruel practice was to kidnap children from their parents on Shabbos to make it more difficult for them to be pursued.

Weingarten’s case will be heard in a Guatemalan court on Wednesday, according to local media reports. 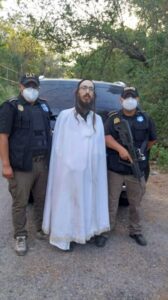