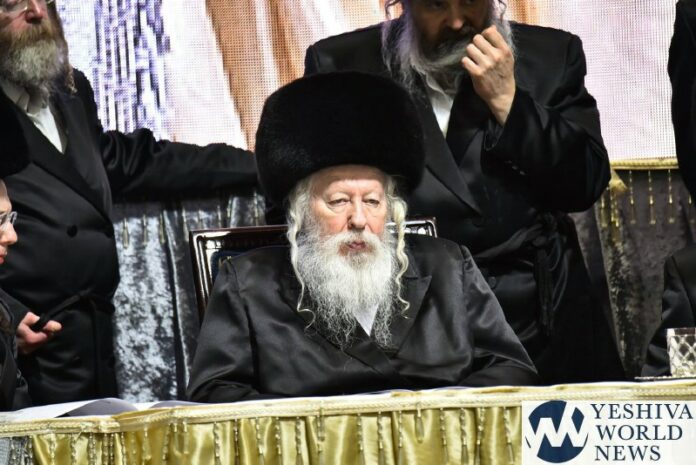 As has been announced in recent weeks, the Gerer Rebbe Shlita is undertaking a historic visit to America to strengthen the hundreds of families of Gerer Chassidim in the United States, and the many initiatives that the chassidus has implemented under his guidance in recent years, as well as to build upon the successes of the past.

Making this visit even more historic is the wedding of the Rebbe’s granddaughter that will be held here, enabling the chassidim in America to participate fully in the incredible celebration. Chassidim from Eretz Yisroel—who usually participate in the wedding celebrations in the tens of thousands—have only been allowed to make the trip to America above the age of thirty-five, maintaining the focus on the American community who are being afforded this rare opportunity. Weddings in the court of Ger usually bring out tens of thousands of chassidim from throughout the holy land to the great Gerer Beis Medrash on Rechov Yirmiyahu in Yerushalayim. But this simcha has been designated by the Rebbe for the American community, which indeed feels greatly privileged by this extraordinary move.

This visit comes on the heels of two years in which chassidim have mostly been unable to journey to Eretz Yisroel for “nesiyos” to the court of the Rebbe.

The duration of the visit will be utilized by the Rebbe, shlit”a, to meet with the mechanchim of the mosdos in America, and to bolster the numerous successful initiatives that the Rebbe has pioneered—building the future upon the successes of the past.

Some examples of this are in the unique derech halimud that has been introduced in recent years, in which, beginning in the cheder years, talmidim master large amounts of dapim of Gemara, with a great number of reviews. This system has gained fame throughout the world, as Gerer bachurim are tested, ba’al peh, on hundreds of dapim, and in some instances all of Shas. The Rebbe will likewise continue initiatives for vigilance in the arena of technology—a battle in which he has been at the forefront for decades.

For the moment, the Rebbe remains at the Monsey home of Reb Shloime Werdiger—a legendary pillar of the chassidus, loyal chossid of the Rebbe shlit”a, who serves as the Chairman of the Board of Agudath Israel of America, and a great philanthropist of Jewish causes throughout the world.

Next week, in advance of the aufruf, which will take place on Parshas Shoftim, the visit will officially begin, and the Rebbe will meet with mechanchim and leaders of the mosdos, to impart his guidance for the further growth of the community spiritually and materially.

The opportunity will also be afforded for chassidim to “go in” to the Rebbe to give a kvittel, and to draw chizuk, as well as receive Brachos for the new year which is fast approaching.

The anticipation in advance of this official start of the visit is indescribable—since the visit is sure to renew and strengthen the fervent connection that is always felt toward the Rebbe, and to leave behind a spirit of kedushah, joy, chassidus, and elevation at its conclusion.