Religious Affairs Minister Matan Kahana was verbally attacked as he arrived at an azkara for HaRav Avraham Yitzchak Hakohen Kook, z’tl, at Har Hazeisim on Wednesday.

Members of Chazon, a Chardal (Chareidi Dati Leumi) organization that is adamantly opposed to the religious reforms that Kahana is advancing, yelled at him: “Rasha, Sheigitz, Tamei – leave! How do you dare come here? Don’t desecrate the kever of Rav Kook!”

They also distributed flyers excoriating Kahana for his disrespect of the Rabbanut, which is associated with HaRav Kook, z’tl, as he served as the first Ashkenazi Chief Rabbi of Israel when the British was in power.

“It’s impossible to be silent about the terrible chillul Hashem caused by your disgraceful behavior toward the Rabbanut, forcing their hand on religious matters against their will and contrary to their opinions,” the flyer said.

The flyer also quoted the words of HaRav Tzvi Yehuda Kook, z’tl, Rav Avraham Yitzchak Kook’s son, at a kenes in 1960. “The instructions of my father HaRav, z’tl, are clear and explicit, that the obligation of mesirus nefesh regarding ‘Yeharog v’al yaavor’ for being forced to do something against the Torah, is not only against goyim but is also the din if a Jew, privately or publicly, tries to force a fellow Jew to do something against the Torah.”

Noam MK Avi Maoz, who was also present at the azkara, called to Kahana: “Take back your reforms and ask for mechila from HaRav Kook, zt’l.” 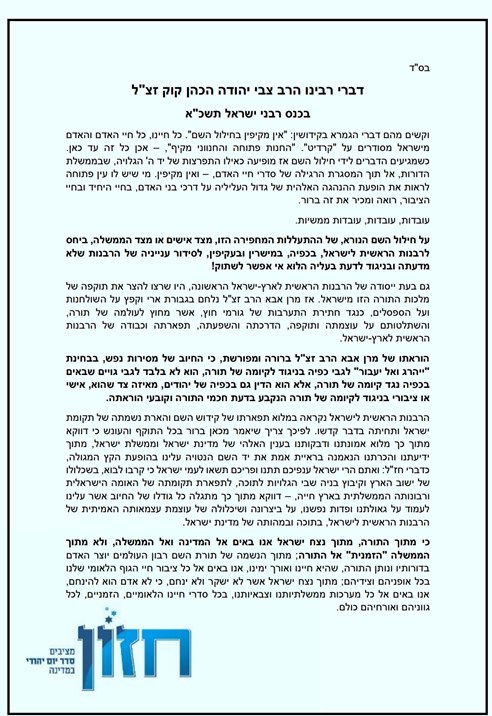