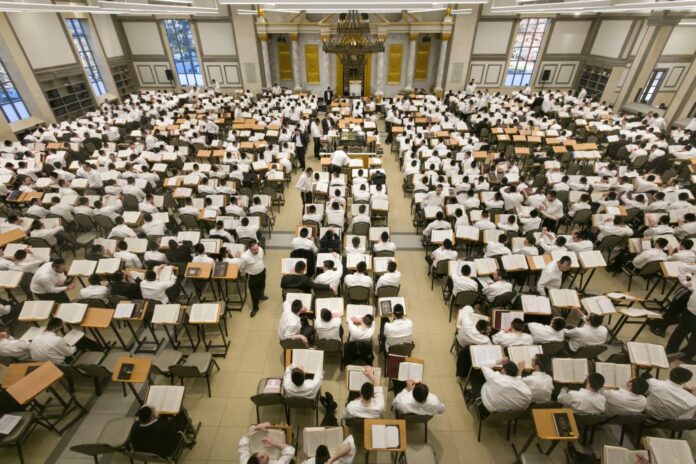 It was early 1942, and Beis Medrash Gavoha was just established. Not in Lakewood, however, but in in Westchester County, New York. It was on the corner of Central Avenue and Chatterton Parkway in White Plains.

That was when a number of students including Rav Nosson Wachtfogel zt”l, had joined together to study. One of the main organizers was Rav Hillel Blishko who was also one of the founding organizers of the Tiferes Bochurim movement in Europe.  He appointed Rav Mendel Zaks zt”l as the first Rosh Kollel.

In White Plains, there were three buildings: a dormitory, a Beis Midrash, and a dining room.  Rav Zaks gave the shiurim to the Kollel and the Mussar Shmuessim as well.  Rebbitzen Zaks cooked the food.  There was also a Rebbitzen Schreiber who had cooked food as well.

But then the pipes burst in the main building.  The repair costs were extraordinarily high. Reb Hillel could no longer carry the financial burden and asked Rav Zaks to take over the financial responsibility.

A few months earlier,  Rav Aharon Kotler zt”l had called a meeting of all Bnei Torah in the Clymer Street Shul at the corner of Bedford Avenue. About 150 Torah scholars came to the meeting.

Rav Aharon now knew that the European Yeshiva world was no more, and not soon to be rebuilt. The future of this Torah world would have to be rebuilt in America. He told them that the generations of the past were likened to diamonds, gold and silver. They, the current generation, were merely iron. But iron is what the links of a chain are made of. They must continue the chain. It was a transformative shmuess.

The group of Bnei Torah that had formed under Rav Hillel Blishko, were well aware of the status of Rav Aharon, the former Kletzk Rosj Yesjiva – who had arrived in the United States on Erev Pesach, 1941.  Accounts differ as to what happened next.  Soon either the group or Rav Hillel Blishko issued an invitation. Rav Aharon Kotler zt”l was to give shiurim and take full spiritual and financial responsibility.  It had first been offered to Rav Mendel, but he felt that he was not cut out to raise such huge sums.

Eventually, the Yeshiva moved to Lakewood, New Jersey. Why the move from White Plains to Lakewood? There are different theories, but it is likely that the situation in Westchester was not conducive for Rav Aharon giving his shiurim.

A new location was now necessary. Like White Plains, Rav Aharon wanted a town with few distractions, a town close enough to New York, yet a town outside of New York. Irving Bunim came up with Lakewood, New Jersey. Lakewood, at the time, was a resort town with many hotels.

They engaged the services of Reb Menashe Rabbinowitz, a realtor in New Jersey. They found a building at 617 Seventh Street, owned by a Mr. Kaufman who had recently passed away. His relative was very enthusiastic about the project, particularly because he had the real estate agent participate in a chazannus memorial for World War I soldiers some twenty years earlier . In April of 1943 a building was purchased and renovations began immediately. As soon as they could, the bochurim moved in and began learning.

Today, of course, BMG has become a citadel of Torah learning.  Indeed, Rav Aharon’s vision at the Clymer Street Shul has become a reality.  There is perhaps one difference.  It is no longer iron. It has once again become gold.