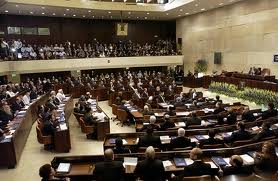 The Knesset on Wednesday, 3 Kislev 5774 passed the Stern bill in its preliminary reading in a 45-16 vote. The bill seeks to establish nationwide giyur centers. If the bill passes its first, second and third readings it becomes law. This would result in permitting rabbonim nationwide to perform conversions, essentially taking the process out of the control of the Chief Rabbinate of Israel.

According to Stern this is not the case as he feels his modified giyur process serves to strengthen state-controlled giyur. He adds “I am not embarrassed to say there are some who feel the process will include leniencies. To the best of my knowledge, the chief rabbis are on board.

MK Yitzchak Vaknin, who was serving as speaker presiding over the session corrected Stern, informing him the Chief Rabbi is not backing his bill was is evident from the Chief Rabbinate statement.

Minister of Religious Services Naftali Bennett supports the Stern bill, explaining “we remain committed to improving religious services. Dialogue is the key and any unilateral actions taken will be vetoed by us. At day’s end we are a Jewish nation and legislation will be in line with Halacha while it must also be good for the State of Israel.”

“In this case it is good as the partnership with MK Stern and Deputy Minister of Religious Services Rabbi Eli Ben-Dahan have used dialogue to coordinate regarding Halacha and this is good for the State of Israel. Therefore the cabinet is supportive. However, anyone who believes there will be civil marriage that is not in line with Halacha is mistaken.”

MK Moshe Gafne, who opposed the bill, explains from his perspective, the bill is not in line with Halacha. He accuses Bennett of doing things that are against Halacha. Gafne adds the letter from Rabbi Dov Lior Shlita instructs him not to support the bill, as do other dati leumi rabbonim.

The bill will now go to a Knesset committee where it will be prepared for its first reading.