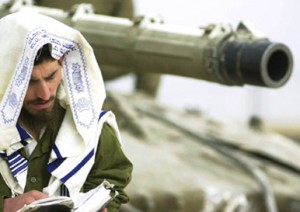 Leading dati leumi poskim including Rabbi Tzefanya Drori Shlita and Rabbi Chaim Druckman Shlita have spoken out against the new policies of the IDF, warning these policies are creating a difficult atmosphere for religious soldiers and officers.

“There are powers that are making the military more permissive while shouting ‘the religious are threatening the army…” stated Rabbi Avichai Ronsky, a former IDF Chief Rabbi. Ronsky stated today the number of dati leumi officers in command positions is evident and that number increases by the day and none of these fine officers is threatening the military. Ronsky rejects that there is any legitimacy to concerns the religious officers are trying to take over the military.

These rabbonim are interviewed in the weekly dati leumi BaSheva newspaper, speaking of how the military is working behind the backs of the religious officers to create a new reality, one that is unfriendly to religious officers. They speak of the fact that frum soldiers may be compelled to listen to women sing in addition to a more permissive dress code for female physical education instructors. In the past explain the rabbonim, there was an understanding, taking the religious sensitivities of observant soldier and officer into account but this has changing.

The rabbonim today feel the IDF is not cooperating with the Zionist rabbonim as in the past and it is opting to distance itself from rulings and policy of its own Chief Rabbinate and Chief Rabbi Brigadier-General Rafi Peretz.

“No one asked us, consulted with us or included us” explains Rabbi Druckman, adding “the information regarding the policy changes was leaked out.”

YWN-ISRAEL that from the time of her appointment, IDF Chief of Personnel Branch Major-General Orna Barvibai made her hashkafa quite clear, to advance women in the military. She has been less than sympathetic when it comes to understanding and accommodating religious issues. She is the highest ranking female officer in the military.