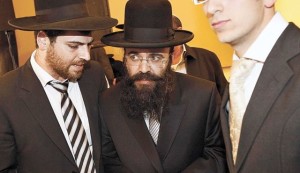 Following the arrest on motzei Shabbos of underworld boss Shalom Domrani, and the involvement of rabbonim in the case, Rabbi Yaakov Effergan (The Rentgan) told Kikar Shabbat that despite reports that indicate Rabbi YA is involved in a plot against him, he does not believe it. According to police, the prominent Netivot rov, rosh yeshiva and mekubal ordered a hit against a senior gabbai of The Rentgan surrounding a dispute connected to the city’s mayoral race.

The rav adds that despite earlier reports in the media to the contrary, he and his family do not feel threatened. He adds that he hasn’t a clue how police came to the conclusion that Rabbi YA is tied to any underworld activity, yet alone ordering a hit, but he is confident the reports are unfounded in fact.

He explains the rabbonim are working in the city for 20 years and there was only one argument, with Baba Baruch and that too was resolved.