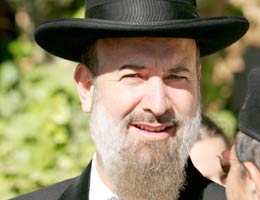 Former Chief Rabbi Yonah Metzger, who was arrested on Monday morning 15 Kislev 5774, has been remanded and he will remain in custody. The Rishon L’Tzion Magistrate Court extended the rabbi’s remand for nine days.

Justice Menachem Mizrachi explained that based on the evidence before the court, “there is reasonable suspicion regarding the allegations against the suspect. This is based in part on weighty confidential reports and there is reason to believe that if the suspect is released he will interfere with the investigation. I base this on an exceptional document that turned the ears of everyone who saw it.”

The court has placed a gag order on some details of the case, including the names of the state witnesses who apparently incriminated the former chief rabbi.

As was reported earlier by YWN-ISRAEL, the chief rabbi has been under investigation for months to allegations of accepting bribes, money laundering, tax evasion and breach of trust. He was questioned ‘under warning’, which means investigators have sufficient evidence against a suspect to make a criminal indictment likely. It appears the Israel Police Lahav 433 investigations unit is now moving ahead with an indictment.