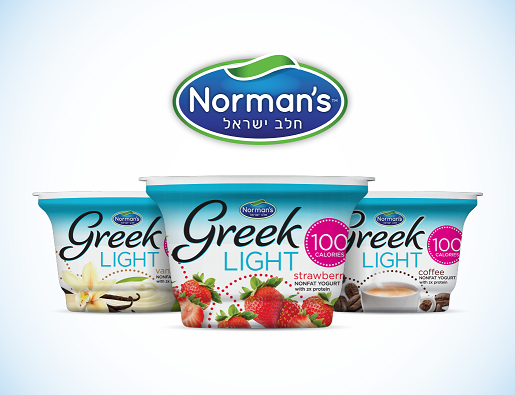 It’s been one year since Norman’s Dairy Delights introduced  the first ever Cholov Yisroel Greek Yogurt at Kosherfest 2012, winning the best new dairy product award at the show’s annual New Product Competition. It subsequently received accolades in Jewish as well as mainstream media, including The New York Times and the New York Daily News.

At last month’s Kosherfest food show, Norman’s released their new line of Greek Light, a premium Greek yogurt  with only 100 calories. Greek Light was a direct response to the persistent requests received by Norman’s for a lighter alternative to their already successful original Greek.

“When we decided to develop our line of Greek Light, we wanted to make sure that the final product would be ideal for those looking to lower sugar and caloric intake while at the same time enjoy premium Greek yogurt,” said a product developer at Norman’s. “We consulted with many nutritionists, including Shani Taub from Lakewood NJ, to determine the right balance in terms of nutrition and taste.  The result, which hit store shelves earlier this week, has been applauded for its excellent creamy texture, great taste, and dietetic qualities.  Many nutritionists have already added Norman’s Greek Light to their list of “must haves” for their clients.

“As a diabetic, I have always had to steer clear of flavored yogurts, which in are usually packed with an outstandingly high number of grams of sugar,” related a member of the Boro Park community. “Any sugar-free or low-sugar yogurts were watery and artificial. Norman’s Greek Light is the first cholov yisroel flavored yogurt I can actually enjoy!”

The Light has only 7 grams of sugar, but packs the same powerful punch of protein and satisfaction as the original Greek. Greek Light was released in 3 flavors- Strawberry, Coffee, and Vanilla, with more on the way.

“This Could Have Only Been From Hakadosh Baruch Hu”