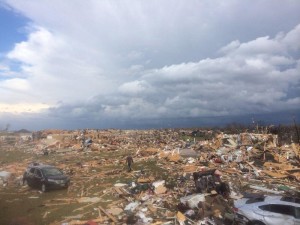 The astonishment was apparent; he said he’d never seen anything like it.

“I’ve read about tornadoes and seen pictures of tornadoes, but to see houses destroyed, to see a roof of a house off … ,” described Rabbi Dovid Tiechtel of the aftermath of recent weather-related events in the Midwestern United States.

The National Weather Service reported that at least 16 tornadoes struck Illinois and northwest Indiana on Nov. 17, with associated strong winds affecting states nearby as well. National reports confirm six dead in Illinois and two in Michigan.

The town the rabbi was speaking of—Gifford, Ill., home to almost 1,000 people—was struck by an EF-3 tornado with winds of 140 miles per hour and a path of some 25 miles. While there were injuries, no one was killed.

“When you see destruction like this, there are two reactions,” explained Tiechtel. “The first is: ‘How does this happen, and why do such things happen? The second is: ‘Wow, what a miracle! All this happened, and everybody survived. And you realize that great miracles take place.’ ”

Great miracles are what Chanukah—which starts on Wednesday night, Nov. 27—is all about, and the rabbi got an early glimpse of them last week. The co-director of Chabad at the University of Illinois and Champaign-Urbana, along with his wife Goldie, went to the hard-hit town—about 18 miles from campus—with a group of students to assist the populace there.a

“We had to do something,” insisted Tiechtel, so he drove there on Wednesday with a staff member to view the destruction and what people required. They were asked to come back the next day, well before many other volunteers joined in the effort this weekend.

“I posted on Facebook that I was in Gifford and coming back tomorrow, and we got such a response … everyone wanted to help out. People cancelled their [plans] to come with us” the next day, on Thursday, he said—no small feat because most students were preparing to leave for Thanksgiving break.

“We talked to one man whose house was flipped on its side; we helped him sort through things and sort through the debris, separating the metals and the wood,” he said. “We brought cases of water and toys—160 bottles of water and two huge boxes of toys. People had brought them to Chabad as donations. We interacted with the [American] Red Cross and the United Way. Most importantly, we were there to put a hand on his shoulder and be supportive.”

“It could be we’re the first Jews they’ve met,” added the rabbi. “They were very touched.”

Rabbi Eli Langsam, who with his wife Sarah co-directs Chabad Jewish Center in Peoria, about 15 to 20 miles from where the tornadoes struck, seconded that “when the need arises, we’re there.”

He started making calls immediately to folks in the affected areas. One the strongest tornadoes—an EF-4 with winds nearly 200 miles per hour—blew through the nearby town of Washington, population 15,000. One person was killed, more than 100 were injured, and as many as 500 homes sustained damage.

Pekin, a city in the Peoria metropolitan with nearly 35,000 residents, was hit by an EF-2 tornado with winds of 120 miles per hour.

In all, seven counties in Illinois were declared state disaster areas.

“It’s total communities decimated, gone, and the whole thing took about a half-hour,” said Langsam. “It was a hot day [last] Sunday, around 70 degrees, and around 11 o’clock, it started pouring rain and hail and everything, and before we knew it—boom!”

He drove to see the areas right away, and on Thursday went to lend a hand to sort through the rubble, returning Friday morning with a group from Bradley University in Peoria, not far from Chabad and where he works with Jewish students.

“It was raining like crazy,” reported the rabbi. “It was totally surreal; it looked like a war zone, like a bomb exploded and destroyed the houses. It’s unbelievable; you can’t believe what you see. They weren’t even letting people go back to their houses.

“I think it’s important to realize that we have to help out,” continued Langsam. “This is our mission, to help those in need. This is a time when we can show, at the end of the day, that Jewish kids are coming to help people. When we see a disaster like this, it gives us an opportunity to appreciate what we have—and to thank G‑d as well.”

That’s part of what Brittney Nadler, an 18-year-old freshman at the University of Illinois and Champaign-Urbana, took away from the experience—the depth of appreciation from those who suffered such losses. She accompanied Tiechtel to Gifford, along with other students.

“I couldn’t get over how optimistic everyone was” when they arrived, she said. “They were really grateful we were there and helping.”

A budding journalism and global-studies student from the Chicago suburbs, she heard about the Chabad effort the night before via email from the president of her Jewish sorority, Alpha Epsilon Phi. She responded right away that she’d be there.

“I’ve never seen a disaster zone or anything like that,” she said. “We pulled up to the town, and it was weird to see how one block was totally fine and the next block was totally destroyed. We helped a guy clean up what was left of his home; we went through the debris. You could see the foundation, and there was stuff everywhere.”

She said she would volunteer again, for this or a similar situation, once she returns from break.

“What better place to get help than a university 20 miles away? There are a lot of us with time and energy,” said Nadler. “We were talking about it with the rabbi on the way home.”

After all, she said: “What if something like that happened to my town? I’d want people to come help, so why shouldn’t I go? You have to put forth that effort when it happens to other people.”