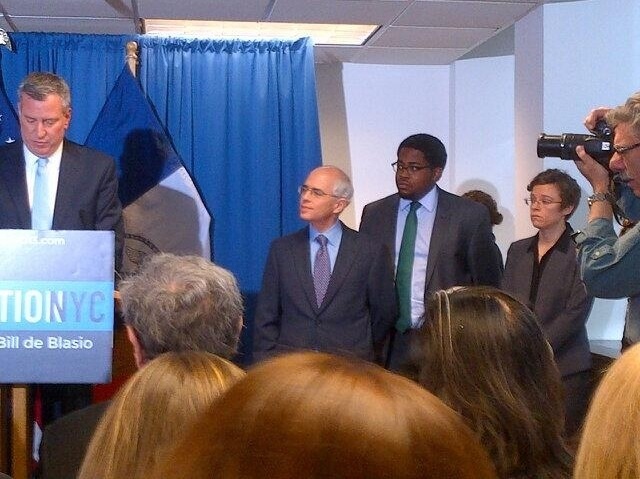 Half his size but higher on the scale of government experience, Former Port Authority Executive Director Anthony Shorris was appointed Wednesday as the first Deputy Mayor to Bill de Blasio in the next Administration, Mayor-Elect de Blasio announced in a press conference at his transition office in lower Manhattan.

‘Tony’ Shorris will serve as the second-highest ranking official at City Hall, and be charged with managing the day-to-day operation of City government and the provision of core services across the five boroughs. Shorris comes to the post as a proven manager at City agencies, public authorities and private sector institutions.

In his opening statement, Mayor-Elect de Blasio emphasized that the current appointment indicates that the incoming administration would be defined by progressive government, competence and diversity.

Mr. de Blasio also appointed his current Chief of Staff in the Public Advocate’s office, Dominic Williams, as Chief of Staff to Deputy Mayor Shorris, playing a central role in the day-to-day coordination of agency and City Hall operations. He will support the First Deputy Mayor in the development of innovative policies, accountability systems and project management.

His former Chief of Staff and brain behind his successful campaign, Emma Wolfe will serve as Director of Intergovernmental Affairs. Wolfe will be charged with working with officials from the City Council to Congress to implement progressive policies that require legislative and executive support. Ms. Wolfe will also play a key role in the campaign to pass de Blasio’s signature pre-K and afterschool plan in Albany this session.

“We’ve set out to build a progressive, diverse and effective government for the people of this city. This team exemplifies those values, and each brings incredible depth and experience to the challenges ahead of us. We share a vision for this city that leaves no New Yorker behind and together, we are going to lift up New Yorkers in every neighborhood and every borough,” said Mayor-Elect Bill de Blasio.

In his acceptance remarks, incoming First Deputy Mayor Anthony Shorris vowed to be an effective and loyal partner to Mayor Bill de Blasio. “We are going to deliver progressive and effective leadership that sets the standard for cities across the country,” said Mr. Shorris. “The rebirth of this city has been my life’s work, and I know its best days are in front of us. We have waited a long time for this progressive moment, and I am incredibly excited to join our new mayor and this team to take this city in a new direction.”