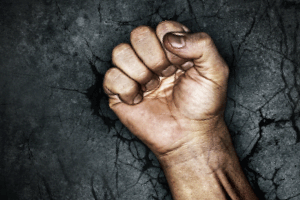 A New York City cop-turned-rabbi is using his seventh-degree black belt to teach vulnerable Jews in the area karate in light of the wave of “knockout” attacks on Jews in the city.

“If Jewish kids started fighting back, they wouldn’wouldn’t get picked on so much,” Rabbi Gary Moskowitz told the New York Post. “I’m just trying to encourage the Jewish community to do that.”

At least eight Jews have been attacked in Brooklyn in recent weeks, allegedly part of a sick trend among inner-city youths in which a stranger is singled out and sucker-punched.

Rabbi Moskowitz, 56, certainly knows what it’s like to be a Jew in the Bronx. He grew up in the Soundview section in the 1960s and took on his share of harassment.

“I wore a yarmulke, and I was a target,” he told the Post. “I was once dragged up six stories to a rooftop by a gang. … They held me over the ledge.”

After attending a Jewish Defense League-sponsored summer camp at age 14, Rabbi Moskowitz returned with the best knowledge of all: how to defend himself.

One day he came across a bully who had urinated on his yarmulke.

Rabbi Moskowitz became a cop in 1982 and is now an Orthodox clergyman who teaches self-defense out of a dojo in the Flushing section of Queens, the Post reported.