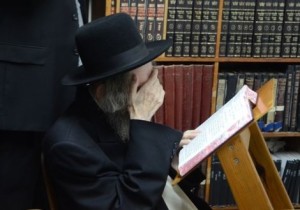 A drunken man got into HaGaon HaRav Aaron Yehuda Leib Shteinman’s Shlita home on Wednesday, 8 Teves 5774. The reported the male was acting in a violent fashion and assumed to be intoxicated due to the smell emanating from his breath.

According to an eyewitness account there were three Brissim in the rav’s home during the morning hours. The man, who is described by Ladaat as “appearing homeless and smelling of alcohol”, tried to get in to see the gadol hador but he was refused entry. He waited and after the family of the third bris left, he ran inside before he could be stopped. He then got down on the floor and he was violent and shouting that he would kill anyone who tries to prevent him from seeing the rosh yeshiva.

Police were summoned but their response was delayed, 15 minutes. In the interim, the Rosh Yeshiva was in the adjoining room, apparently hearing the ruckus. The gabbaim locked the door to prevent the violent possibly drunk man from entering until police arrived.

This is the second recent incident as about six weeks ago; an avreich from Modi’in Illit physically assaulted the gadol hador after breaking into his home. That man has since been found to be mentally unstable.