The snow storm that began a day ago is far worse than anyone could have imagined. One must remember that Yerushalayim is not equipped for such snow accumulations and the result R”L is nothing less than catastrophic.

EMS services are being taxed well beyond their abilities. When one understands that Magen David Adom, Ichud Hatzalah, ZAKA and others are built on a volunteer system. After over 24 hours of responding to storm-related calls, one may be capable of beginning to understand that these volunteers are simply exhausted, many having already worked over 20 hours without a break. One MDA EMT, Yitzchak told YWN-ISRAEL that they finally had to plead for a break to gas up the ambulance after 12 hours of service. The call backlog is staggering and ambulances are among the hundreds if not thousands of vehicles that are stuck around the Greater Jerusalem Area.

YWN-ISRAEL spoke with Ichud Hatzalah founder and president, Eli Beer, who during the phone interview explained “the volunteers are simply unable to function any longer. We began yesterday with 400 members in this area and we are left with 60 at this time” which was about 5:30 AM erev Shabbos 10 Teves 5774. Beer explained that “Since last night we received over 1,100 calls! We are simply unable to get responders to the site of an emergency. Many are trying and we have documented cased in which volunteers took their oxygen tanks and bag and headed on foot for a long distance”. The problem is there is no transport available after a patient is stabilized. 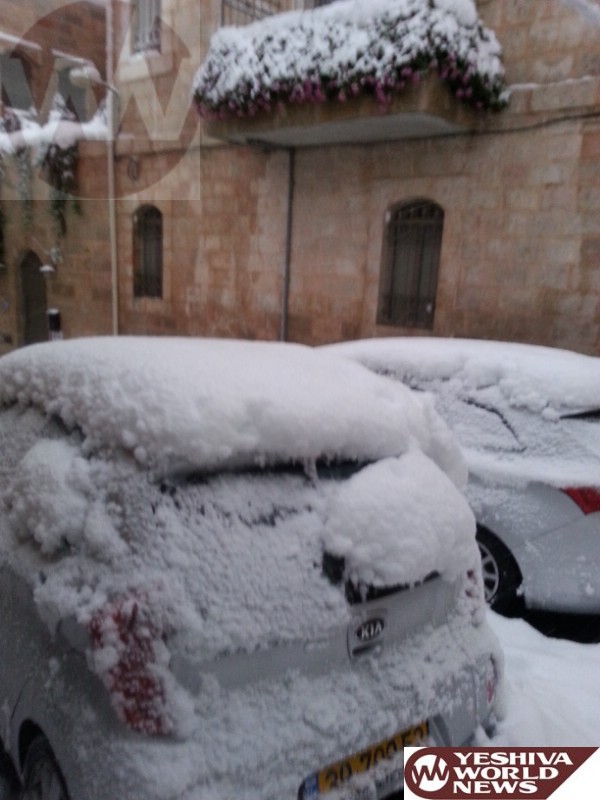 Jerusalem Mayor Nir Barkat has been out in the field with a 4-wheel drive vehicle and has been doing his utmost to remain on top of the situation. At about 2:00 AM he and his staff realized the magnitude of the storm and the mayor personally turned to Israel Police Chief Yochanan Danino and IDF Chief of Staff Lt.-Gen. Benny Gantz for assistance. The city needs a great deal more 4-wheel drive vehicle and drivers trained to handle the snow conditions.

The military is turning to its professional drivers, the reservists who serve as drivers in time of emergency, trained to operate all kinds of vehicles under the worst of conditions. The problem is the snow is hampering their ability to respond. The capital and access roads to it are all snowed in. plows are working to clear the Jerusalem-Tel Aviv Highway (Route 1) as well as the Modi’in-Jerusalem Highway (Route 443) but this is moving slowly. Hampering efforts is the fact that hundreds of vehicles are stranded in roadways, preventing plows from getting through. 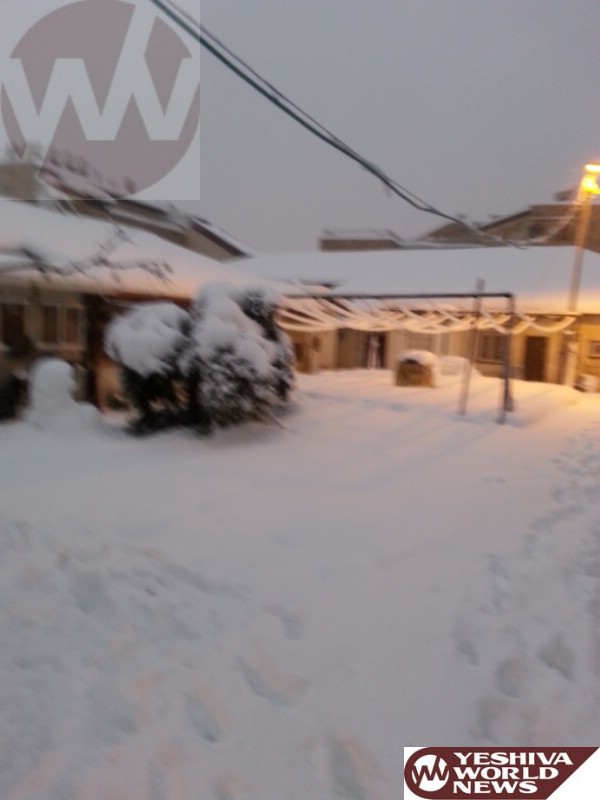 While on the phone with Mr. Beer he received notification that CPR was being performed on a young man in the Jerusalem Convention Hall Center, the result of hypothermia. Beer lamented that “Volunteers have run out of oxygen and they cannot get anywhere to refill. They responded to a number of CPR calls during the night and ran out of oxygen and there was no one that could back them up.”

As the phone call continued, Beer receives a report that jeeps are responding to the Givat Ze’ev area where about 20 people are stranded in vehicles and are beginning to be affected by the cold. 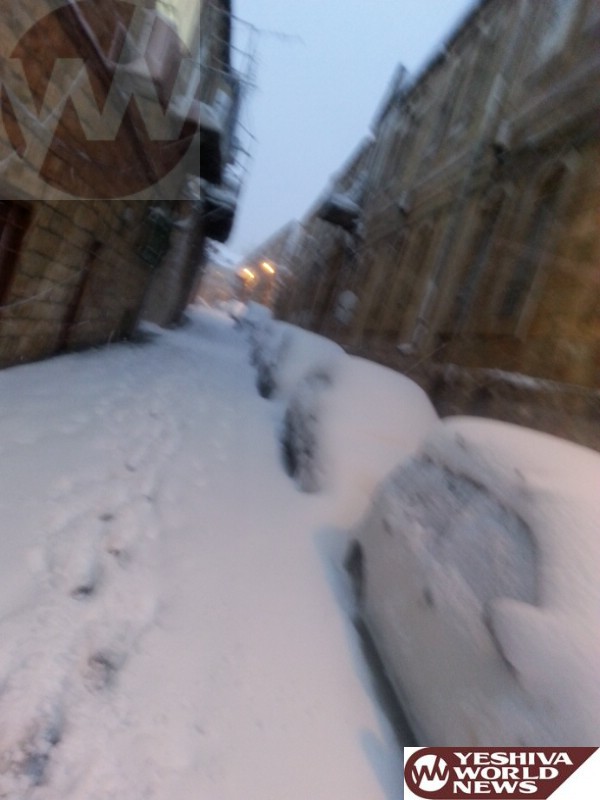 Without seeing it firsthand it is difficult to imagine the scope of what is taking place. The snow continues this morning, albeit slowing down for the time being, and there are simply vehicles stranded on highways and city streets, making it difficult and in some cases impossible for 4-wheel drive vehicles to pass. This is without discussing the downed trees and electric lines, which adds to the hazard. Meteorologists report this storm is a record breaking in many ways.

It is safe to say that without the intervention of the IDF and Israel Police, the situation in the coming hours will worsen as the storm is expected to dump additional snow during the day today, erev Shabbos.

Police are pleading with motorists to stay away from the capital and do not try to come to see and play in the snow.

Elsewhere Friday morning, significant snow accumulations are being reported in Tzfas, the Golan Heights, Shomron, Yehuda, and other areas. Flooding is reporting in low lying areas and in southern Israel.

UPDATES:
07:00
• The entrances to the capital remain closed due to the snow and police are not indicating when they roads will be cleared.
• Israel Police, border police and the IDF have already rescued 2,000 stranded pedestrians and motorists, taking them to one of the shelters that were opened.
• Shaare Zedek Hospital has donated diapers and formula to shelters to assist with the small children.
• Snow accumulations in the capital range from 30-50 centimeters (11.8-19.6 inches).
• Ichud Hatzalah continues calling on volunteers to try to find housing for families that are stranded with small children.

Ichud Hatzalah: A 1-year-old child sustained a light-to-moderate head injury when the roof of a caravan shul collapsed under the weight of the snow in Modi’in Illit.

07:43:
Jerusalem City Hall announced all forms of public transportation are canceled for the coming hours at least.

Israel Police Update 10:27 AM IL:
• 443 cleared of all the stranded motorists, numbering about 600.
• Entrances to the capital remain closed at this time. We hope to complete clearing Highway 1 of stranded motorists soon.
• We hope that “soon” we will begin permitting people who were rescued to head towards the Tel Aviv area to get home in time for Shabbos.
• In a “reasonable time period” 4-wheel drive vehicles will be permitted to head towards Yerushalayim on Highway 1, the Jerusalem-Tel Aviv Highway.
• All roads leading to Gush Etzion and south, Hebron and the area, remain closed.
• Many northern areas, including Tzfas are locked in.
• All motorists are urged to remain indoors, including those with 4-wheel drive vehicles.
• About 1,000 person rescued from the snow remain in the Jerusalem Convention Center.

• Flights have resumed at Ben-Gurion International Airport. Air traffic was halted for a brief period due to the inclement weather.

MDA Director-General Eli Bir reports over 33 ambulances are operating in Jerusalem alone as the EMS organization continues efforts to reach all those seeking assistance.

10:40 AM IL:
Chief Rabbi David Lau calls on Jerusalem residents to open their doors to the many stranded families on this erev Shabbos. The rav added “if the rescue of stranded people has not been completed by Shabbos it is permitted to continue for these people must be brought to warm safe shelter”.

Police and other agencies have rescued over 1,500 people since the storm began.

11:00 AM IL:
Kol Berama Radio quotes the Yerushalayim Vaad Eruvim, which reports some eruvs have been downed by the storm. They will do their utmost to get those eruvs repaired before Shabbos.

11:10 AM IL:
YWN-ISRAEL spoke with a representative of the Badatz Eida Chareidit. The eruv is not operational this Shabbos.

11:15 AM IL:
To assist readers to understand the magnitude of the snow, regarding how it has paralyzed services, Angel’s Bakery, which supplies about one-third of the nation’s bread, and Berman’s Bakery, the second largest bakery, both announced no challah deliveries nationwide since trucks are stuck in the storm in Yerushalayim.

12:08 PM IL:
Despite a ray of optimism from police earlier, there are still many stranded motorists. The chareidi radio stations continue broadcasting the phone number of families wishing to host stranded people. The phone numbers for people to call to offer hachnosas orchim lead to voice mails and no one appears to be responding.

Unfortunately there are literally thousands of people stranded and no system in place to assist. People are in need of diapers, baby formula, clothing and of course food for Shabbos. The situation in the Jerusalem Convention Center, where over 1,000 stranded people are holed up is not a pretty one. There is a shortage of everything with no end to the storm in sight. The weatherman predicts more snow accumulations during the afternoon hours before Shabbos.

Many areas are snowed in, including in the north as well as in Yehuda and Shomron. YWN-ISRAEL has learned the power has been restored to some Gush Etzion communities while all of Mevasseret Tzion remains without power.

Berman’s and Angel’s Bakeries have not delivered challah and they say trucks will not be moving until the storm is clear.

The 10 Teves 5774 snowstorm is far from over and it appears that before the snow can be cleared additional accumulations are expected.

12:19 PM IL:
The Jerusalem Municipality command center released a message at 11:49 AM that in light of the renewal of snow expected in the coming hours, residents are urged to please remain at home.

1:54 PM IL:
Ichud Hatzalah announces that in light of the fact that the major bakeries have not delivered challos, anyone able to make it to their headquarters at רחוב שרי ישראל 6 can have free challos for as long as supplies last.