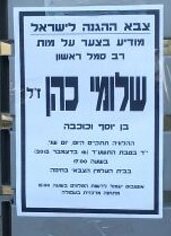 The name of the IDF soldier killed by cross-border sniper fire from Lebanon on Sunday night the eve of 13 Teves 5774 is First Sergeant Shlomei Cohen HY”D, 31, from Afula. Cohen was a navy technician, a career soldier.

Cohen was murdered by sniper fire in the area of Rosh HaNikra. Gunfire was directed at an IDF patrol vehicle near the border outpost, striking the niftar.

The levaya is scheduled for 17:00 in the Haifa military cemetery. Sgt. Cohen is survived by his wife and their infant daughter.