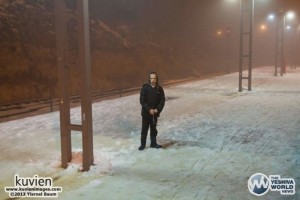 13 Teves 5774/07:55 IL: YWN-ISRAEL apologizes for the interruption of service, which was the result of storm-related outages.

• Israel Electric Company officials report 8,000 families nationwide are still without power. There were 28,000 on motzei Shabbos. 4,500 of the outages are in homes in and around Yerushalayim.
• Some yishuvim in Yehuda and Shomron have been without electricity, water, phones, and mobile phone reception since Thursday.
• Jerusalem schools are closed today due to ice conditions.
• Egged buses halted service in the capital on Sunday night due to ice conditions.
• Jerusalem’s Uzi Narkiss Bridge is closed in both directions due to ice.
• Jerusalem City Hall will not have public hours today due to hazardous conditions in the area from icing.
• Route 443 is open in both directions. Heavy delays reported.
• No schools for students residing in Ariel, Yitzhar, Gush Etzion, Har Bracha, Itamar, Abu Gosh, and all of Tzfas.

08:06:
• Intercity bus service to and from the capital has resumed. Bus and light rail service in the capital remains suspended at this time.

09:29:
Ichud Hatzalah reports EMTs delivered two children, a girl and a boy a short time ago as the mothers were stuck in traffic traveling on the road between Atarot and Machane Ofir.

10:30:
• Limited bus service reportedly starting up in areas of Yerushalayim.
• Light rail service in the capital still down.

• 100 people have reported to Jerusalem emergency rooms since 7:00 AM with suspected fractures as a result of slipping in the ice.
• Heavy traffic on Highway 1 from Latrun to Ein Hemed.
• The light rail remains out of service.
• Limited city bus service restored in the capital.
• Hebrew University has canceled all classes today.
• The National Labor Court is the only courthouse operating in the capital today.

13:15:
The Minharot Tunnel Road is open in the direction of the capital. Gush Etzion Regional Council officials add the IDF has ordered the closure of the road at 18:00.

14:03:
The Jerusalem light rail is running again between French Hill and the central bus station.

14:20:
If your car is one of the hundreds towed, you may call 100 and police operators will be able to tell you what facility it was taken to.

15:00:
While numerous bus lines are operating in Yerushalayim, service is limited and routes are changed, a dictated by a bus’ ability to navigate streets.