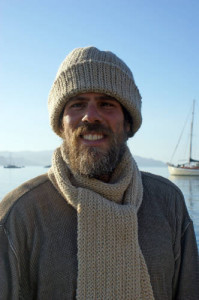 It is cold weather season, and the coats, gloves and scarves are coming out. Scarves are definitely “in” and constitute a billion dollar industry with such top designers as Burberry, Prada, Missoni, Alexander McQueen, Cole Haan, Chanel, Etro, Lanvin, Hermès, Nicole Miller, Ferragamo, Emilio Pucci, Dior, Fendi, and Louis Vuitton. These designers manufacture square scarves (mostly for women), triangular scarves, and the most common, rectangular scarves.

It is said that the scarf originated in ancient Rome, where it was called the “Sudarium” – perhaps the origin of the Talmudical term “Sudar.”

Scarf lengths and widths vary greatly as well. Most scarves are over five feet long and often are very wide. And while there is no question that our practice is not to wear Tzitzis on a scarf, the question arises as to why exactly we don’t.

The Bais Yoseph (OC 10:11) writes: A kerchief that is placed around the neck – it would appear that if it has the minimum size, it would be obligated in Tzitzis. Even though he only covers his neck with it, it is still called, “asher techase bo – that you cover yourself with.” The verse does not state, “that you cover your entire body with.” The Bais Yoseph continues, “And I have already seen of those who are careful in Mitzvos who would place tzitzis on them, but in all of Egypt they do not do so..”

The Bais Yoseph lists three possible reasons why the custom outside of Israel has evolved not to place Tzitzis on a scarf.

1] Because the only item that is halachically termed a garment is something that is actually worn or one wraps himself in – a scarf is only considered “ha-alah – arisen upon him.”

2] The main purpose of a kerchief is to wrap it around the head to protect from cold weather or to create shade during heat, therefore, they are considered garments of the head and not garments of the body.

3] The main purpose of wearing kerchiefs is to use them for other purposes such as wrapping up money, to carry fruits, to wipe off sweat, to gird oneself when doing labor, to wipe one’s hands, etc.

The Chofetz Chaim writes in his Biur Halacha (Siman 10 “Sudar”) that both the Mogain Avrohom and the Vilna Gaon seem to rule like the last explanation in the Bais Yoseph by virtue of the fact that this is the reason they quote in their restatment of his view. Accordingly, he writes, our modern day scarves fit none of the above explanations. He thus concludes that a G-d-fearing individual should round off a corner of the scarf to ensure that it not be obligated in Tzitzis.

This author would suggest that those who wish to follow the view of the Biur Halacha here, would only have to do so if the scarf is close to nine inches wide. Most woven scarves do not meet this width. It is clear, however, that most Bnei Torah do not seem to follow the view of teh Mishna Brurah in rounding off one of the corners.

As far as the other two reasons cited in the Bais Yoseph, it could be that the Vilna Gaon and Mogain Avrohom rejected the first ideaof ha-alah being an exempt type of wearing from the words of Tosfos in Menachos 41a “Tcheiles.” Tosfos writes that this would also necessitate the wearing of Tzitis. As far as the second reason, that the scarf is considered a head-garment not a body garment, in the more northern countries, where it is rather cold, we do actually use it on the neck and not on the head.

There may be another rationale to be lenient, and not round off a corner as the Chofetz Chaim seems to recommend. When one does wear a scarf that is more than nine inches wide, the scarf is often folded in half – width-wise. If that is the case, there may be another reason to be lenient because it could be that the minimum requirement necessitates that the garment be worn that way as well.

ARTICLE APPEARED IN THE 5TJT