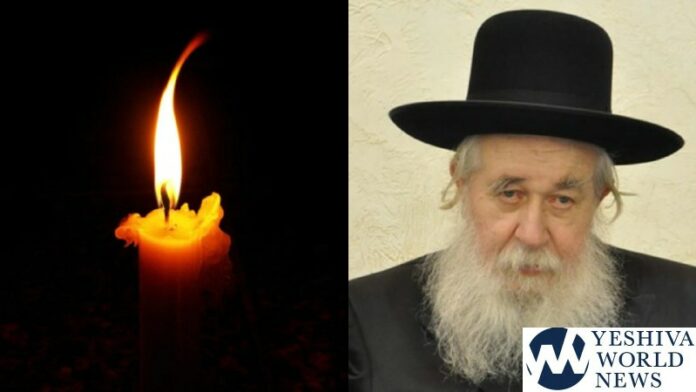 YWN regrets to inform you of the petirah of HaRav Shimon Braish zt”l, a leader of the Agudas Achim kehillah in Zurich, Switzerland. He was 96 years old.

Rav Shimon zt”l was the son of Rav Mordechai Yaakov Braish, the mechaber of Chelkas Yaakov and the rav of Zurich. He was born prior to World War II at a time when his father was the rav in Disburg, Germany, and fled with his family to Zurich when the Nazis rose to power.

Rav Shimon learned in the yeshiva of Monterrey, Switzerland, where he was the chavrusah of Hagaon HaRav Aharon Leib Shteinman zt”l, whom he remained in close contact with until Rav Shteinman’s petirah.

He was one of the foremost leaders of Agudas Achim and serves as a maggid shiur in the kehillah’s bais medrash for 50 years, with people coming from far and wide to listen to his incisive clarity on the sugyos of Shas.

His son Rav Chaim Zt”l was Niftar around 10 years ago. He was a Rosh Yeshiva in a Mesivta in London.

He is survived by a large family, including his son Rav Aharon, rosh yeshivas Chernobyl; Rav Yisroel of Gush Shmonim in Yerushalayim; and hundreds of grandchildren.

The Levaya was being held on Sunday in Yershalayim on Menachem Meishiv Street and the Kevura was to be in Har Hamenuchos.