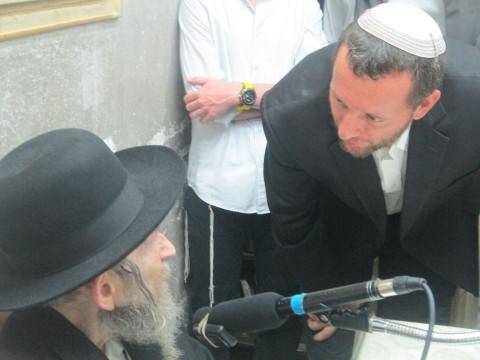 Yishuv Eli resident Rabbi Netanel Elyashiv took his talmidim with him to Bnei Brak to give them a glimpse of the Torah city. They visit include a stop at the home of HaGaon HaRav Aaron Yehuda Leib Shteinman Shlita.

Following the visit Rav Elyashiv posted his reaction on his Facebook page, describing the impression made on him and the talmidim by the modesty of Maran’s lifestyle and home.

“The man was born 100 years ago, on the eve of the outbreak of the first world war in the city known as Brisk. There he was close to Rav Yitzchak Ze’ev Halevy Solovechik. When he arrived in Israel in 1946 he worked in the diamond field. However, the Chazon Ish realized his greatness and compelled him to Torah related endeavors in the chareidi world. This included Rosh Yeshivas Ponevezh for Tze’irim.”

Rabbi Elyashiv adds “The rav received us cordially and he encouraged the talmidim to take life seriously and that the tachlis of life and our existence is not about eating, drinking and sleeping, all of which are consumed. They are only means, the purpose is to grow in Torah and to become people who do not live meanly but with dignity.”

“What can non-chareidim can learn from character of Rav Shteinman” asks Rav Elyashiv. “First of all, you look at the wall behind him. Only Gaza sees such walls. This is how his entire small apartment appears”, concludes Rabbi Elyashiv, who speaks about how the level of modesty of the gadol hador’s home and lifestyle are a striking example for all.