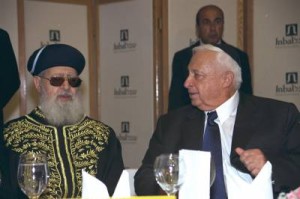 Speaking with BaKehilla magazine, Rabbi David Yosef Shlita explained there is a world of difference between Prime Minister Binyamin Netanyahu and former Prime Minister Ariel Sharon. The interview was conducted as Mr. Sharon was being laid to rest.

Rav Yosef explains that Sharon maintained an open channel of communications with Maran HaGaon HaRav Ovadia Yosef ZT”L and always remained sensitive to the needs of the religious community.

He cited one case in which they learned that a boat loaded with chodosh wheat was headed for Israel and the news of the ship’s imminent arrival had Maran very concerned. Maran ZT”L placed a call to then Minister of Industry & Trade Ariel Sharon, and they explained to him the significance of importing chodosh wheat to Eretz Yisrael and the problems that would result.

Sharon telephoned back not too long after receiving the call, explaining that boat with the chodosh wheat was heading to another country in the region and boats of only yoshon wheat, which was documented, will be heading to Israel.