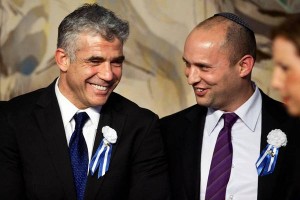 When asked recently to comment on the relationship with Bayit Yehudi leader Naftali Bennett, Finance Minister Yair Lapid stated jokingly “He has been demoted to cousin. He is no longer a brother. I never had a cousin before”.

Lapid was participating in a forum in the Eretz Yisrael Museum addressing the recent announcement by the Chief Rabbis of Israel, that they support the long-standing psak Halacha prohibiting women from serving in the IDF. Lapid called their announcement “a stain on the Chief Rabbinate… it does not bring kovod to Yiddishkheit and I will work to have them dismissed”.

Lapid explained the chief rabbis are state employees and such a position is unacceptable. “For example, Major-General Orna Barvibai should not serve” he asked, referring to the chief of personnel branch.

Lapid then shifted attention to what he calls “the many mashgichim that travel abroad frequently.” He feels that Bennett is the Minister of Religious Services and Minister of Economy, adding he expects Bennett’s cooperation to stop this.

Lapid added that if he really wanted to push the matter, he could have been foreign minister but he opted for finance minister because he promised voters to address lowering the cost of living. He stated that he was not going to levy value added tax on fruits and vegetables for this is one of the state’s symbols of defense for the poor and while some of the state symbols are costly, it will remain in place.