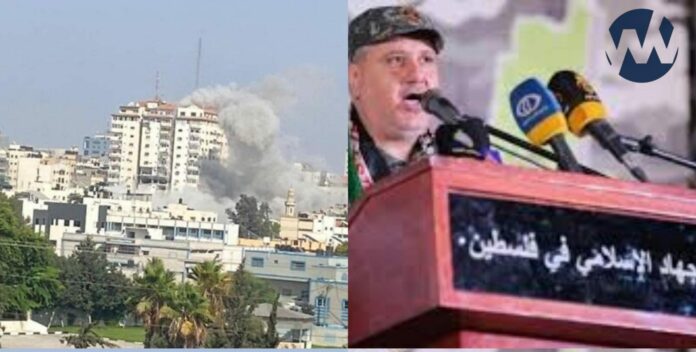 The Israeli Air Force has unleashed a barrage of airstrikes in Gaza as it announces the launch of “Operation Dawn.” Included in the airstrikes was the targeting and killing of top Islamic Jihad commander Tayseer Jabari, who succeeded Baha Aby al-Ata as leader of the Islamic Jihad following his assassination in 2019.

The IDF says it estimates that it has killed 10-20 terrorists thus far in the strikes and has hit six terror sites in the Gaza Strip.

Interior Minister Ayelet Shaked said: “We don’t know how this could play out… but this could take time… This could be a lengthy round and a hard one.” She said Islamic Jihad “sought to bring life to a standstill in Gaza border communities and we were not prepared to allow this to happen.”

She added that the IDF is only targeting Islamic Jihad terrorists at this time, though the conflict could expand to other terror groups, including Hamas.

Gaza terrorists are now warning that they will target Yerushalayim and Tel Aviv with rockets. The IDF is responding by deploying Iron Dome air defense systems near the cities, as well as near Beersheva.

A short while ago, the IDF struck Islamic Jihad targets in the Gaza Strip (today, Friday, 5 August 2022). The goal of this operation is the elimination of a concrete threat against the citizens of Israel and the civilians living adjacent to the Gaza Strip, as well as the targeting of terrorists and their sponsors. The IDF is acting in operational coordination with the ISA and intelligence bodies.

“The Israeli government will not allow terrorist organizations in the Gaza Strip to set the agenda in the area adjacent to the Gaza Strip and threaten the citizens of the State of Israel. Anyone who tries to harm Israel should know: we will find you.

The security forces will act against Islamic Jihad terrorists to eliminate the threat they pose to the citizens of Israel.”