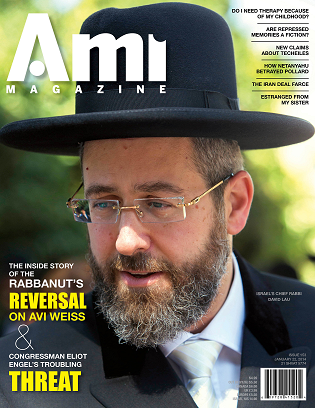 The Jewish world has been dismayed by Israel’s Chief Rabbinate’s reversal regarding the status of Avi Weiss, the founder of Open Orthodoxy.

Weiss’s reformist agenda, including ordaining Jewish women as Orthodox rabbis, has previously caused the Rabbanut to reject Weiss’s letters attesting to the Jewish status of people seeking to get married in Israel.  Last week the Rabbanut announced that it will once again accept Weiss’s letters of attestation. This change threatens to have far-reaching repercussions both in Israel and in the United States. In this week’s Ami Magazine, the secret factors that influenced the Rabbanut’s reversal are unearthed.

Rabbi Tzuriel Bublil, an attorney and pulpit rabbi who previously worked in the chief rabbinate, spoke to Ami about the decision-making process he has uncovered in talks with high-echelon officials of the present rabbinate. Further, the role of a troubling letter sent by US Congressman Eliot Engel (NY-D) to Benjamin Netanyahu, calling on the prime minister to intercede in the rabbinate’s religious decisions, is examined in an interview with Prof. Paul J. Weitham of Notre Dame University, an expert in separation of church and state. See the expanded coverage in this week’s Ami Magazine.