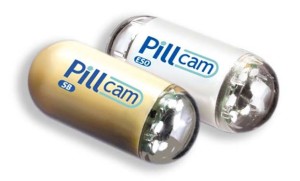 Given Imaging Ltd. said Monday it has won U.S. approval for an ingestible pill camera that can help doctors screen the large intestine for polyps and other early signs of colon cancer.

The Israeli company’s technology, developed from missile defense systems, uses a battery-powered camera to take high-speed photos of the intestinal tract over the course of eight hours. The images are transmitted to a recording device worn around the patient’s waist and later reviewed by a doctor.

Analysts originally expected Given’s approach to directly compete with traditional colonoscopy procedures. But company studies found that the images taken by the mini-camera are not quite as clear as those of from the in-office procedure. As a result, the company has pursued a more limited market for its PillCam: patients who have trouble undergoing standard colonoscopies.

The Food and Drug Administration approved the company’s PillCam Colon for patients who have experienced an incomplete colonoscopy. The company estimates 750,000 U.S. patients are not able to complete the procedure each year, due to anatomy issues, previous surgery or various colon diseases.

Even with this limited indication, analysts estimate the new pillcam could grow to sales of over $60 million in North America by 2019, with room for expansion as the technology improves. MorningStar analyst Debbie Wang said the company has shrewdly positioned the device as another tool in the gastrointestinal specialist’s tool kit, rather than a direct competitor.

“Given’s management understands that that traditional colonoscopy is the gastroenterologist’s bread and butter right now,” Wang said. “So they didn’t want to do anything that would position this as a substitute.” Wang points out that Given’s PillCam costs $500, significantly less than the $4,000 for a colonoscopy. Eventually, she thinks doctors may use the device to attract adults who avoid regular screenings due to fears of pain, embarrassment and general discomfort. The Centers for Disease Control and Prevention’s guidelines currently recommend regular colonoscopies beginning at age 50 and continuing until age 75, though the majority of American adults don’t follow the recommendations.

In December, Irish medical device firm Covidien announced it would buy Given for about $860 million. Given, headquartered in Yoqneam, Israel, markets seven lines of medical devices and surgical supplies, including pillcams to screen the esophagus and small intestine.

Pillcam Colon was previously approved in 80 other countries, including in Japan, Europe and Latin America.