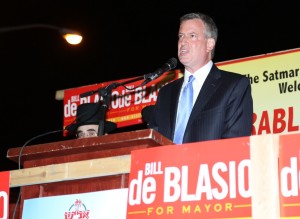 Bill de Blasio isn’t backing down from his role as a staunch supporter and defender of the State of Israel. Despite the national criticism over his closed-door AIPAC speech last month, Mayor de Blasio said Monday he remains an ‘unabashedly pro-Israel’ advocate.

In a radio appearance Monday morning, the mayor was asked whether the speech to AIPAC fits into his brand as an outspoken progressive? “Of course it’s a very complicated dynamic in the Middle East,” the mayor told Brian Lehrer on WNYC radio program. “I think that the core of this is I’m unabashedly pro-Israel–meaning: the state of Israel, the survival of Israel, the sense of alliance that this country needs to have with Israel. I think Israel is in constant danger. I think, bluntly, there’s been some real indications of sustained antisemitism all over the world.”

But Mayor de Blasio cautioned that he still disagrees with some of AIPAC’s hawkish stances, especially on their lobbying for the Iran sanctions bill. ”That doesn’t mean I agree with every policy by the Israeli government at any given moment, of course,” he said. “I’ll obviously have my differences with any given organization or any given foreign government.

“But my core point here is: As the mayor of the city has a certain extraordinary deep tie to Israel and the huge Jewish population that we have, I do think it’s incumbent upon me to defend the state of Israel in the context of a very hostile world.”

Last week, Malcolm Hoenlein, vice chairman of the Conference of Presidents of Major Jewish Organizations, lauded mayor de Blasio for understanding the importance of standing up and speaking out for what he believes in.

“When Moses turned over the leadership to Joshua, he summed up what a leader has to be in two words: ‘Chazak V’ematz’ – be strong and have the courage. There are a lot of leaders who have the convictions but no strength. There are a lot who have the strength but no convictions. A real leader has to have both, and the courage to stand up when it’s not popular,” Hoenlein said Thursday night as he introduced Senator Chuck Schumer to deliver the keynote speech at Councilman Chaim Deutsch’s inauguration.

“And I want to say, we have two great examples of that in our city – one is Chuck Schumer, who stood up on the Iran sanctions bill, as he has on some any other things, because it wasn’t easy. And because of him others followed. And the second one – Mayor de Blasio, standing up when he went to AIPAC and said, ‘I as mayor will stand up for the state of Israel’, regardless of those who were against it. That is what a public official has to be. They have to stand up and speak out and have the courage of their convictions,” he said.