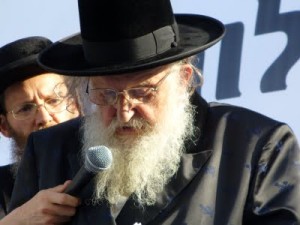 Eida Chareidis Gavaad HaGaon HaRav Yitzchok Tuvia Weiss Shlita on Wednesday afternoon 12 Adar I 5774 is planning to protest at the building site with members of the beis din. According to a Kikar Shabbos report, Rav Sternbuch has threatened to resign if they protest against the construction. Simultaneously, a protest is planned at Kikar Shabbos in Yerushalayim.

Rabbonim in Rav R’ Sternbuch’s inner circle explain a protest would be in direct contradiction to his psak, ruling the construction is not compromising kevarim. The ravaad is unwilling to accept a public display of total disregard of his ruling. This latest development attests to the growing split in the Eida.