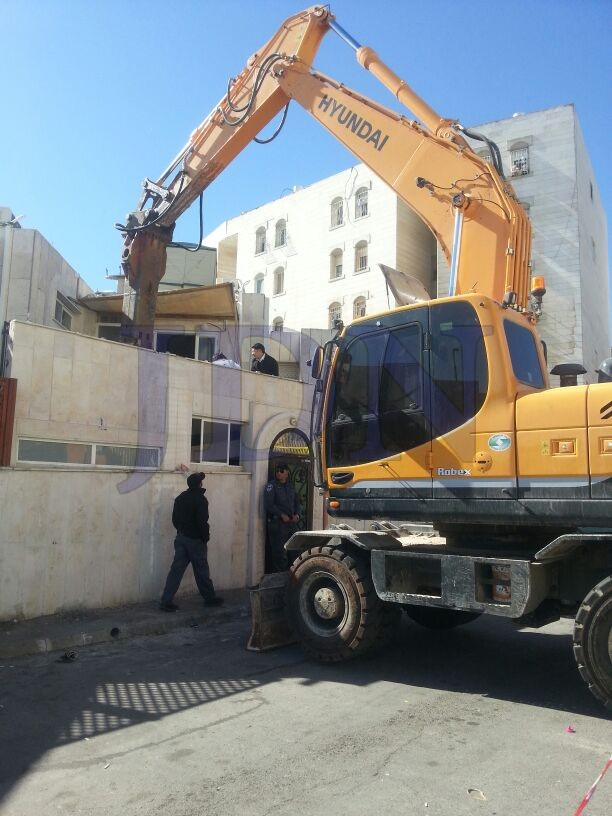 Some explained that when the bulldozer arrived in Gilo on Wednesday morning, 12 Adar I 5774 to execute an order to raze the illegal structure it was like seeing the destruction in Gush Katif all over again. The structure in question is an illegal addition to a private home, which has served as a shul for 15 years.

The shul on HaShayish Street is a part of a private home in the southern neighborhood of the capital, and askanim and councilmen were working to get a stay order from the courts to prevent the destruction, but City Hall officials were unwilling to wait one hour, preferring to rip the shul apart.

The shul has been run by Rabbi Avital Maimon has been operating for a decade-and-a-half, but it appears due to a growth in the minyan, a portion was added in the past year, extending onto the porch about five meters (5.4 yards).

Councilman Aryeh King, who heads the United Jerusalem party added “Tens of mosques are built against the law and not a single one of them has ever been razed”. King, a member of the dati leumi community, questions why there is not a louder outcry from the tzibur, stating the public should be outraged at seeing such an act.

King worked with Councilmen Rami Levi and Michael Michaeli to get a stay order, and the court set a hearing for noon, but City Hall was impatient and was unwilling to wait an hour.

City Hall officials say the court rejected the request, adding that no matter what agreement was reached in the past regarding the shul, the operators continued violating the agreements until it reached a point the city felt compelled to act. City officials add that the addition to the private home is illegal, the shul is in violation of zoning laws and operating without a permit, and the court has issued a demolition order.

Community residents were horrified to see the destruction, stating they would have expected the city to fight to keep a shul and not the opposite.

Ultimately, the demolition was not completed and the court is hearing both sides. King and Levi submitted their conditional letter of resignation from the city council, explaining if the remaining structure is knocked down they will resign, unwilling to serve as part of such an administration.