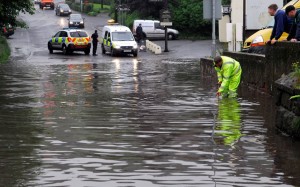 Soggy Britain is being soaked again.

The River Thames has burst its banks, rail lines have been washed away, villages have been turned into islands and soldiers are out on the front lines filling sandbags. As residents battled to save their homes — and British politicians battled one another — yet another storm hit the U.K on Wednesday, pummeling the west coast with torrential rain and wind gusts up to 106 mph (170 kph).

Here’s a look at the nation’s exceptionally wet and wild weather.

WHAT CAUSED THE FLOODS?

Rain, rain and more rain. England has had its wettest January since records began almost 250 years ago. Since December, the country has been lashed by waves of wind and rain connected to a faster-than-usual jet stream, which flows from west to east across the Atlantic. Britain’s weather agency, the Met Office, says “there’s no definitive answer” on the role played by climate change in the recent weather. But it says there’s “an increasing body of evidence that shows that extreme daily rainfall rates are becoming more intense” — likely due to a warming world.

HOW BAD IS IT?

About 5,800 properties have flooded since December along England’s southwest coast, the low-lying Somerset Levels and the Thames Valley west of London, where several riverside villages and hundreds of pricey properties were swamped this week as the river burst its banks. The Severn and Wye rivers in western England are also on flood alert. On the Levels, which often flood, thousands of acres (hectares) of farmland have been under water since the beginning of January, with some villages accessible only by boat or emergency vehicles.

Although the Thames is flooding up to London’s western limit, the river is not expected to burst its banks in the city center. The part of the Thames that runs through London toward the sea is tidal and is protected by the Thames Barrier, a series of 66-foot (20-meter) high metal gates across the entire river that can be closed to stop the tide from coming up. By holding back the tide, the barrier creates more space in the river for excess water from upstream to flow down. At low tide, the Thames barrier is then opened and the floodwaters flow to the sea.

HOW MUCH WILL THE FLOODS COST?

The current crisis is worse than floods in late 2012 that the Environment Agency calculated cost the economy 600 million pounds ($1 billion). Insurers face a multimillion-pound (-dollar) bill from flooded homes and businesses. As well, fertile farmland is under water, fishermen can’t go out to sea and waves have washed away part of the main rail line to the southwest.

COULD MORE HAVE BEEN DONE TO PREVENT FLOODING?

Flooded residents certainly think so. Many blame a lack of planning and budget-slashing. The government’s Department for the Environment, Food and Rural Affairs has seen its budget cut by 500 million pounds ($820 million) since 2010 by Britain’s Conservative-led government. The abandonment of annual river dredging during the 1990s has also become a hot issue. Scientists say dredging — which allows rivers to carry more water and flow more quickly — wouldn’t have prevented the current floods but might have lessened their impact.

“With the amount of rainfall we’ve had, it was always going to be a very severe flood,” said Hannah Cloke, associate professor of hydrology at the University of Reading.

SO WHAT ARE THE POLITICIANS DOING?

Politicians have responded to the public anger with a flurry of bickering and finger-pointing. Some blamed the Environment Agency, the body in charge of flood defenses; it responded it was doing its best with a reduced budget. Sensing a political crisis, Prime Minister David Cameron cancelled a trip to the Middle East and has chaired crisis meetings on the floods. He told lawmakers Wednesday that “money is no object in this relief effort” and promised that everything from pumps to troops would be sent to flood-hit areas.

WHEN WILL IT ALL END?

It’s not clear yet. The Met Office says at least one more storm is due this week, though the weather may settle down later in February. The Environment Agency has warned communities along the Thames and in Somerset to expect more flooding. In the long run, some areas may have to be abandoned to the water. The coast is being eroded by the sea, while areas like the Somerset Levels rely on dredging and pumping just to keep water at bay. And across the country, thousands of houses have been built on flood plains. As sea levels rise with global warming, some say it may become too expensive to save them.

Richard Ashley, a flooding expert and emeritus professor at the University of Sheffield, says the problem won’t be solved by throwing money at it. He says officials have to face up to a future of floods and “change the culture of how they approach this.”

“It is going to continue to get worse,” he predicted.